Elected to College of Fellows American Institute of Architects

In an April 2, 1957 letter from the Executive Secretary of AIA, Williams is offered the honor of Fellowship and membership in the College of Fellows "for your notable contribution in Public Service."

Excerpts from letters supporting his nomination include:

Graham Latta, Los Angeles Architect, July 1957
"...Paul's achievements in Architectural design should not go unnoiced. Over the many years that I have been familiar with his work, I have become aware that it is consistently good, often with a personal touch that makes it recognizable without seeing his name."

In a subsequent letter to an American ambassador, the AIA Executive Secretary writes about Williams: "He has been a member of The American Institute of Architects since 1923 and a year or so ago he was advanced to Fellowship in The Institute and is now a member of our College of Fellows. He is the first negro to be so honored."

"When singer Frank Sinatra unveiled his new Hollywood home on Person to Person, millions of televiewers oohed and aahed. Overnight, the house became the talk of the country, establishing architect Paul R. Williams as the master of the small house field. ... 'Being a bachelor,' Sinatra told him, 'I don't want a large house. Just something small and liveable.'" 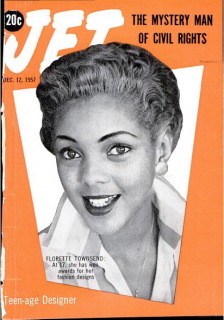 "A $30 million life insurance firm to be operated on a nationwide basis and place special emphasis on better housing for Negroes, was formed by Negro leaders in Denver, Colo. Temporarily named National Equality Life, the new organization will be largely owned and operated by Negroes. The directors are architect Paul Williams of Los Angeles..."

Paul R. Williams receives Achievement Award from the LA Chamber of Commerce along with Welton Beckett and Charles Luckman for their firms' work on the airport. They were honored with this award because of "their vision to see tomorrow, the courage to find new solutions and technical competence to translate an idea into sound structures and a practical transportation instrument." 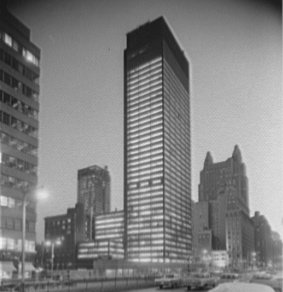 In a 1958 review, the magazine Architectural Forum calls the newly opened Park Avenue headquarters for the Seagram Liquor Company "a half-million square foot laboratory in which new and special office designs are tested in actual use." The building embodies architect Mies van der Rohe's philosophy that "structure is spiritual" and "less is more." The Seagram becomes a 20th century symbol of corporate power and a model for other company headquarters.

Mies van der Rohe works with designer Philip Johnson to create the 38-story, stainless-steel and glass building. With bronze-clad pillars and floor-to-ceiling tinted glass, the building appears as a curtain wall to passers-by. The Seagram Building revolutionizes the architectural design of skyscrappers. With smooth glass lines, the building is a total break from the "wedding cake" style of the Empire State or Chrysler Buildings. Mies van der Rohe includes a public plaza with fountains as an integral part of his design. This concept changes New York City building codes and the definition of successful public spaces.