"The automobile is a useful vehicle and its usefulness will probably grow as time passes...The automobile is still in an infantile stage of development. Clumsy, crude and costly as they are...there is an extensive field for self-propelling vehicles..." 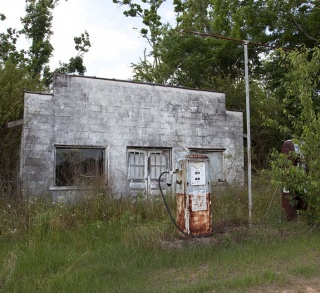 At the turn of the 20th century the automobile is used primarily for recreation by wealthy Americans. The fuel or gasoline is sold to car owners at drugstores. In 1905 the first business (or filling station) dedicated to dispensing gas or oil directly to the motorist opens at 412 S. Theresa Avenue in St. Louis, Missouri.

Automobile ownership increases after Henry Ford mass produces an affordable vehicle for the American middle class. With middle class ownership the demand for filling stations increases and more Americans can "motor" anywhere there are roads.

Access to gas stations allows the average person to build his home anywhere the car can take him. In The Small Home of Tomorrow (1945), Paul R. Williams writes about the importance of the car to Americans ... including designated space for the car in their homes. "In a house of more extreme modern lines the carporte, or automobile shelter, has been made a feature of the exterior design."