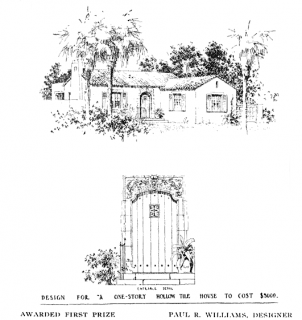 Paul R. Williams' simple, compact, and "well thought out" entry for the Hollow Tile House Competition is awarded first place by a panel of important regional architects including John C. Austin. The judges write that Williams' superior renderings, tasteful exterior treatment and lack of "useless ornaments" contribute to the ease and economy of construction. His landscape design fits with Southern California conditions and extends the useable living space. 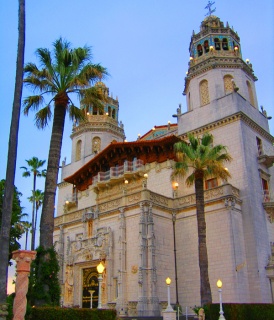 Newspaper publisher William Randolph Hearst inherits a 240,000 acre ranch near the Pacific Ocean in 1919. He hires Julia Morgan to design a grand castle for La Cuesta Encantada, the Enchanted Hill. Morgan is a pioneering female architect in California in the early 20th century. She is the first woman graduate of both Beaux Arts School in Paris and the School of Engineering at the University of California in Berkeley. She receives these degrees before women were allowed to vote.

Morgan and Hearst jointly supervise building the castle. The relationship is successful as Morgan believes the architect should be a semi-anonymous contributor guided by the "spiritual needs" of the client. Designing a building from the inside out, Morgan's style reflects many ancient and historic sources. La Cuesta Encantada is described by architectural historians as "a hodge-podgery of art and architecture...excessive in decoration but it suited Hearst perfectly. It was a proper monument to this man of extravagance and excess as no classic pile would have been."

Morgan and Hearst would continue work on the castle until his death in 1951. La Casa Grande, three guesthouses, outdoor and indoor pools, support buildings, terraces, gardens and all furnishings are donated to the State of California in 1958.