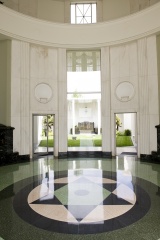 In June 1916, when he was 22, Paul R. Williams was one of five national medalists in a Society of Beaux-Arts Architects competition for design of a mausoleum. More than 34 years later, he was selected as architect for the mausoleum at Hillside Memorial Park in Culver City and its memorial for Al Jolson, the last and greatest of the black-face minstrel entertainers.

Beaux-Arts design, developed over more than two centuries, focused on monumental buildings of public importance. Modernists endeavored to replace it with buildings stripped of historical references—buildings made in and for the 20th century. However, the Depression and World War II confronted modernists with the dilemma of how machine-inspired design could serve emotional needs. Williams, who was trained in both Beaux-Arts and contemporary architectural engineering, found his solution in the dignified, hybrid Art Moderne style.

Cresting the hilltop and visible for miles, the mausoleum’s great white wings embrace the site, the slender temple of the Al Jolson Memorial and the cascade.  Echoing the Jolson memorial, the mausoleum’s soaring circular vestibule opens to a meditation garden and to the wings illuminated by stained glass windows.  Stately wood paneled corridors extend from the wings toward the back of the building. Reflection is symbolized by polished white, red, green and black marble and bronze ornaments. Despite the building’s grandeur, it cherishes small personal offerings—snapshots, posies, pebbles, candies—to those resting within its walls.