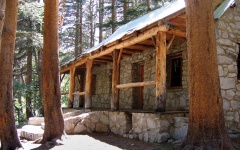 During the 1930s, Williams became “architect to the stars,” and by the decade’s end he was a luminary himself. In 1939, Life magazine wrote, “Perhaps the most successful Negro artist in the U.S. is Paul R. Williams….”

For all Williams’ success and though he lived in one of the least discriminatory cities in America, racial injustice framed his world. He designed mansions in Beverly Hills but couldn’t live there; he designed elegant shops and restaurants where he was unwelcome. In Nevada, where he had many clients, he could not find commercial lodging, food or office space. Traveling to Washington, D.C., where he opened an office with African American architect Hilyard Robinson, he had to “ride in the ‘Jim Crow’ car.” In a 1937 article, Williams wrote candidly about these experiences, his success and his belief that leaders like actor Paul Robeson and educator Mordecai Johnson of Howard University demonstrated and inspired the advancement of the race.