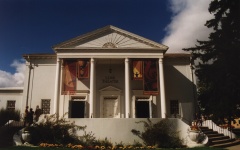 In the early 1940s, war preparation redirected materials and skilled labor from civilian purposes. Workers for defense industries urgently needed housing, and Paul R. Williams served as chief architect for Pueblo del Rio, one of Los Angeles’ first integrated public housing projects. After the declaration of war on December 8, 1941, Williams’ staff dispersed, and he became an architect for the U.S. Navy.

An imperative concern was the return to civilian life of 17,000,000 service personnel. Where would they live, work and play? Williams addressed this problem in his books, The Small Home of Tomorrow (1945) and New Homes for Today (1946) and his service on state and national housing commissions.

After the war, Williams’ practice quickly recovered. In January 1948, Time magazine reported in an interview, “Under construction were $20 million worth of houses, stores, etc. designed by architect Williams.” Local projects included housing developments, grand mansions, an addition for the Beverly Hills Hotel and the complete interior redesign of the Beverly Wilshire Hotel, but an increasing number of projects came from areas far beyond Los Angeles.

Williams and A. Quincy Jones, a young prewar employee, partnered on regional modernist designs for the Tennis Club and the Town & Country Center in the vacation city of Palm Springs.