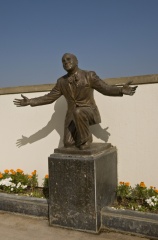 On February 7, 1951, Los Angeles Superior Judge Newcomb Condee authorized the expenditure of $84,000 for the construction of a monument at Hillside Memorial Park for the late Al Jolson. In a petition to the court for funds to build the proposed shrine, Jolson’s widow Erle listed Paul R. Williams as the designer to build the “World’s Greatest Entertainer’s” final home.

From minstrel show to blackface, vaudeville to Broadway, and talkies to radio, Jolson with his over-sized persona has been called “… the most sentimental of all sentimental singers, a poor Russian cantor’s son daubed with burnt cork and down on one knee sobbing for the mammy he had never known in a south nobody ever knew.” (image 1)(Alistair Cooke. The Guardian, 1950) By the 1930s with more entertainment choices available, the public's appreciation of Jolson’s dated performance style diminished and soon he was hustling to make a living by working at small nightclubs across the country. Social commentator Alistair Cooke described him as the “most thorough has-been in the American theatre.”

When Al Jolson died in 1950 at age 64 of a heart attack, he was at the crest of his latest career boom. With a show business resume that included every 20th century entertainment medium, he was once again a box-office champion—a 1947 record album selling over 800,000 copies, a hugely popular major motion picture about his life with a proposed sequel, and sell-out performances with big money fees. Marrying his beautiful, young, fourth wife, Jolson’s life and career had turned around. Jolson said, “This was no come-back, I just couldn’t get a job.”

Al Jolson’s sudden death made national headlines and the initial funeral was a moviedom spectacular. The ten active and 57 honorary pallbearers were a who’s who of show business and included Bob Hope, Bing Crosby, Louis B. Mayer, Edgar Bergen, and William Paley. Jolson’s body was temporarily interred at Beth Olam Cemetery while work on the Williams’ designed monument progressed.

David Gebhard in An Architectural Guidebook to Los Angeles describes the Williams’ monument as “an abstracted version of an open classical temple that is oriented toward a water cascade.” Situated on a plot, almost 40 by 80 feet, the six-pillar structure of 16 different types of imported Italian marble is 75 feet tall and topped by a dome with hand-set, mosaic tiles depicting Moses holding the Ten Commandments (image 8). Lite at night it can be seen for miles. Nearby is Carl Romanella's bronze statue of the singer on one knee in his famous Jazz Singer pose. The 120-foot, five-tier cascading water feature with extensive landscaping was added at the cemetery’s expense (images 3- 4). (Los Angeles City Magazine, August 1962)

In a second impressive public ceremony held on September 23, 1951, Jolson was placed in a marble sarcophagus inspired by the historic 1822 design of Napoleon's tomb in the Eglise des Invalides in Paris. Like Napoleon, the entertainer's ornate coffin rested beneath a stone rotunda. (Wesley Howard Henderson. Two Case Studies of African-American Architects' Careers in Los Angeles, 1890-1945, 1992)

Because there was no provision for a monument in Jolson’s will, Superior Judge Condee was asked to rule on the appropriateness of using estate funds for the construction of such an elaborate memorial. While some newspapers at the time considered the cost and size of the marble structure in bad taste (The Los Angeles Mirror), Judge Condee wrote in his ruling, “…in this case involving a man so well known as Mr. Jolson I believe the expenditure is justified.” (Los Angeles Times, February 8, 1951)