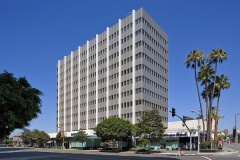 On October 6, 1957, the Los Angeles Examiner published a preliminary drawing (image 2) of the Linde Medical Building to be built on the corner of Wilshire and Spaulding. It was reported in a 1958 issue of Jet magazine that the building, designed by Paul R. Williams and located on L.A.’s Miracle Mile, would cost $2 million.

By 1960 plans for the proposed medical building had expanded to 12-stories covering almost an entire city block. Williams' design for the building has been described by architectural historians studing this area of Los Angeles as an example of "classic Modern-era style with a tall verticle mass of the building set against a long, horizontal mass." (Westside Subway Extension Project. Historical Properties Supp. Survey Tech Rept. March 2012) In the revised plans the upper levels would have space for 100+ separate medical and surgical practices. (It was estimated that this reconfigured building would cost at least $6 million.) The ground floor with its distinctive black marble planters and gravel flooring, would house a variety of retail interests, a bank and restaurant. An attached 4-story parking garage provided parking "atop the roof of the pedestal portion of the building." In an interview in the Los Angeles Times (January 17, 1960) Morris Linde, president of the development and construction company, described the future building as a full-service facility that would become an urban healthcare mecca with "complete laboratory and an x-ray department and large express elevators. All suites will have thermostatically controlled heating units." He proudly described the safety features of the Williams' design as fire-proof steel with all concrete construction.

In March 1961 the building's steel skeleton was in place on the NW corner of Wilshire and Westwood Blvds. Using over 1,000 tons of steel and 10,000 cubic yards of concrete, the project had been expanded to 250,000 square-feet. Known as the Linde Medical Plaza, the glass- and marble-finished building would transform the Westwood neighborhood. (Los Angeles Times, March 19, 1961)