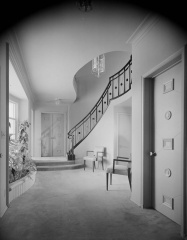 In 1944 Aaron and Frances Lilien sold their home in the Westwood area of Los Angeles and moved into their custom Paul R. Williams' Colonial Modern in nearby Holmby Hills. When Janss Investment Company carved the subdivisions of Westwood and Holmby Hills from Wolfskill Ranch in the 1920s, by socio-economic measures the properties were light years away from each other. Westwood was developed as “3300 acres of scenic territory between the city and Santa Monica…open to home seekers and investors ... comprised of 1000 residential and business lots…” (Los Angeles Times October 29, 1922). Holmby Hills was a 400-acre estate district on the most desirable section of the ranch. The residential lots ranged from 1 to 4 acres and all houses cost at least $25,000 and $5,000 more than the construction minimum in beau monde Bel Air.

Holmby Hills was the address for many film greats of the time: Bing Crosby, Judy Garland, Gary Cooper, and Gregory Peck. Although Aaron Lilien was a successful owner of the Los Angeles Meat Company, he wanted the same elegant traditional architecture as the Hollywood crowd. The Lilien home was a refined slimmed-down version of the Colonial-style desired in Hollywood. Williams’ design was the perfect balance of client aspiration, tasteful sophistication and modern California—free of clutter and excess ornament. Merry Ovnick, professor of cultural history at California State University believed Williams “refined his clients’ aspirations. He was their tutor in good taste." While his clients might not know what they wanted when they initially walked into his office, Williams believed it was his job to "help them find it and keep within the bounds of grace." (Los Angeles Times, October 11, 1970)

Williams' utilization of natural stone, recessed lighting, and smooth, unadorned ceilings gave the Lilien home an open, modern feel. His repeated use of the curved shape found in the metal entry stairway and throughout the details of the house (images 1 and 4) including room dividers, custom lighting fixtures and the fireplace andirons unified the design. Banks of large windows and sliding glass doors (image 2) with views of the landscaped pool area, opened and extended the living space.