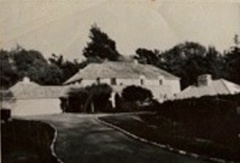 The owners of the Paul R. Williams designed mansion on South Beverly Glen were as “grand” as his design. The 22-room French Provincial-style residence completed in 1948 for Louis Lesser, fabled Los Angeles businessman, was home to a member of the Rothschild banking family, a local grande dame and an African American businesswoman known as Southern California’s “first Lady of Real Estate.” (Los Angeles Sentinel. May 8, 1986) Through the decades this Holmby Hills estate was known as “one of the most sought after venues for social and civic events.” (Orange County Register. February 4, 2009)

Entrepreneur Louis Lesser closed his first big deal in 1928 when he was a ten-year-old selling magazines.  At 36 he was a millionaire and ready to retire. “I had all the money I thought I would ever need. But then came the problem of putting my money to work. Before I knew it, I was in the real estate business.”  The retired and slightly bored Lesser returned to the business of making money and soon controlled hundreds of companies. (Los Angeles Times. March 13, 1960) In the 1950s and 1960s he would be responsible for creating and managing thousands of large-scale properties across America. Lesser never thought small.

By 1947 Lesser was ready to build a residence celebrating his success. Purchasing property in Holmby Hills, one of Los Angeles’ most established residential areas, he hired Paul Williams to design his home. Familiar with the architect’s revival-style work, Lesser wanted a design with instant history but modern engineering and comfortable interiors. These rare photographs of the original exterior and interior designs illustrate Williams’ ability to combine historic elements with the modern California life style creating something unique for his client. The house was completed in 1949.

In 1951 Lesser sold the house and all furnishings to Ethel Irish Coplen, a single mother, well-known philanthropist, successful business owner and Los Angeles personality. (The Coplen family has speculated that Lesser might have been motivated by financial problems and sacrificed his residence to satisfy creditors.) Charmed by the house, Mrs. Coplen was determined to preserve it “intact as it was designed by Paul Williams.” (Personal communications. July, 2014) For decades the Los Angeles Times chronicled the hundreds of social activities Mrs. Coplen held at her estate. Embarking on a new career in her 60s as a Cruise and Social Director on the Matson Lines, Ethel sold the house to a member of the Rothschild family.

In 1975 Eula Hendrick McClaney, an African American rental property entrepreneur, toured the empty mansion and “loved it on first sight.” Writing in her memoirs, “I couldn’t go to sleep… Something was moving and stirring inside me, keeping my mind on the Holmby Hills property. I began to ask God to show me how to turn the deal.” Eventually she purchased the estate and made it her home base for work and family. (E.H. McClaney. God, I Listened. 1989) Today the house remains in the McClaney family.

Five families have owned this Williams’ designed house. Ethel Coplen chose to maintain the original design and Williams’ aesthetic choices while successive owners have made extensive changes. The Rothschilds were the first to alter the design, adding a library to the front of the house. Others added and subtracted features, reflecting their unique tastes and the evolving needs of modern California families.

In the 1990s Ethel’s son attended a luncheon held at a Paul Williams designed home in Hancock Park. The one thing the guests had “in common was that they owned or had owned a Paul Williams home. It was one of the neatest parties I have attended in my lifetime.” These images provided by the Coplen family are the only surviving record of Williams’ original design for the Lesser home.