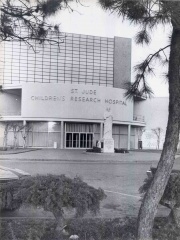 When Paul R. Williams offered to design the first building for a children’s hospital in Memphis, Tennessee for his friend Danny Thomas, little did they imagine the international role of St. Jude in protecting children’s health. Over seventy years ago Thomas, a young struggling entertainer with no money and little promise, made a pledge to Saint Jude, the patron saint of hopeless causes: “Help me find my way in life and I will build you a shrine.”  Soon after making this promise his career began to flourish through films and especially in television. After his professional success in the early 1950s, Thomas discussed with friends and religious advisors the tangible form for his vow. Eventually the idea of a children’s hospital in Memphis took shape.

For over ten years Thomas, along with his wife Rose Marie and business leaders in Memphis raised money to fund the initial hospital building. Thomas’ vision for the hospital was revolutionary for its time. No child would be turned away because they could not pay and the patients and hospital/staff would be totally integrated, an idea unheard of in segregated Memphis. "Black and white patients were treated in the same rooms; Black and white parents waited together ... Black doctors treated white patients." (From His Promise: A History of ALSAC and St. Jude Children's Research Hospital. 1996) The Memphis community embraced Thomas, his family and the hospital’s concept.

In California Danny Thomas met Paul R. Williams, the architect who would later design the entertainer’s family home. Thomas’ vision of creating a center devoted to both researching and curing catastrophic childhood diseases appealed to Williams and the architect offered to donate plans for the first phase of the hospital construction. His architectural design featured a five-pointed star—the Star of Hope (image 2). When Williams first presented his ideas to Thomas, he was unaware of the importance of the star as a unifying design motif. He did not know that the star had already been identified as the hospital's symbol. "Some people call this nice coincidence," said Danny Thomas at the time. "I call it the hand of God pushing Williams' pencil." Williams would become a board member of the St. Jude Hospital Foundation, the hospital's fund raising group. (St. Petersburg Times, January 31, 1962)

Williams designed St. Jude as a three level central hub with five radiating wings. The first floor and basement of the hub housed a mix of administrative offices and patient/staff support departments. The second floor was used for staff meeting rooms, patient classrooms and a biomedical library. The library, located over the front entrance, featured small outdoor reading areas where scientists and clinicians could relax as they read. Three of the "wings" were dedicated to research with inpatient rooms that could accomodate only 38 children. As the building was near a major earthquake fault, the structure was engineered to "resist Zone 3 earthquake damage, the first building in the city to follow uniform building code."

The hospital was dedicated in 1962 during weeklong celebrations.
On the tenth anniversary of the hospital’s opening (1972) Paul R. Williams was honored at a gala dinner in Memphis (image 3) for his contributions to the hospital. If the architect had returned in 2000, he would not have been able to locate his original hospital building. All but one "ray" of the original Williams’ star had been replaced to make way for a $1 billion expansion, doubling the size of the original campus to 2.5 million square feet of research, clinical, and administrative space.