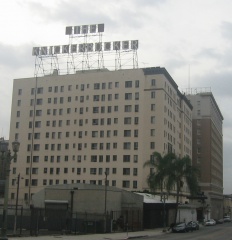 In Greek mythology the cosmic role of one of The Fates, Lachesis, was to assign destiny. When architect E. M. Frasier built the eleven-story, Spanish Colonial style Knickerbocker at 1714 Ivar Avenue in 1923, Lachesis must have decided against the project. Originally an apartment/hotel with the slogan “Your home for a year or a day,” the Knickerbocker is forever linked in public memory with commotion, loud brawls, bizarre happenings and tragic deaths. With 500 rooms and 200 suites the Knickerbocker was one of the earliest luxury hotels to open in Hollywood. In its cycle from upscale apartment, to glamorous celebrity hotel, to a deteriorated residence for drug addicts and prostitutes, and finally to housing for seniors in the 1970s, the Knickerbocker was star-crossed. Known as the Hotel of the Stars, at important junctures, the professional life of the hotel and Paul R. Williams crossed. (Marc Wanamaker. Hollywood:1940-2008, 2009)

Paul R. Williams had completed his first redesign of the Knickerbocker by October 31, 1936. On that night Beatrice Houdini (image 3) with her friend Dr. Edward Saint and 13 distinguished guests held their 10th and final séance on the roof of the hotel. Waiting to hear from the dead Harry, Bess and her supporters were surrounded by the magician’s props believing he would use them to communicate from the other side. Houdini never showed up, but through the years scores of other celebrities did, enjoying Williams’ updated, fresh interiors, and luxurious amenities. Gone were the heavy curtains, velvet and tapestry seating and Spanish-Moorish appointments of the original Frasier design. Richard Alleman writing about the popularity of the hotel noted that it was fashionable for “celebrities between coasts, between marriages, and between studios” to make it their home. In the 1920s, silent movie greats like, Rudolph Valentino (image 2) drank, met women and danced the tango at the hotel’s posh Lido Room. After Williams remodeled the hotel, it was a choice setting for Los Angeles weddings including architectural photographer Julius Shulman who married his Emma there in 1937 after a seven-year courtship.  The hotel now hosted the stars of the new movie era: Dick Powell, Bette Davis, Mae West, and Frank Sinatra. Marilyn Monroe honeymooned there with Joe DiMaggio and Elvis Presley stayed in room 1016 when recording his Elvis album and filming Love Me Tender. He also posed for Heartbreak Hotel photos in one of its rooms.

During the 40s, 50s and 60s the Knickerbocker advertised itself as "A Whisper off Hollywood Blvd Where Famous Stars of the Entertainment World Meet." (brochure) Because of this popularity it was frequently the scene of Hollywood’s bizarre happenings. Police dragged the troubled actress Frances Farmer, screaming obscenities, covered by a shower curtain across the hotel lobby and on to a mental institution and eventual lobotomy. D. W. Griffith, the pioneer movie director of Birth of a Nation (1915) and co-founder of United Artists, lived in self-imposed exile at the Knickerbocker not having made a movie since 1931. (Image 4 shows Griffith with other UA founders: Mary Pickford, Charlie Chaplin, and Douglas Fairbanks Sr.) In July 1948 he died alone in his room. A distraught costume designer, Irene, slashed her wrists and leapt to her death from the 11th floor leaving a note to other hotel guests, saying “Neighbors: Sorry I had to drink so much to get courage to do this.”

By 1955 the Knickerbocker was ready for another Paul R. Williams makeover. Jet magazine reported that the Williams' renovation was scheduled to begin that June at a cost of $1 million. A feature of his design was a sun and cabana penthouse club to be built at an estimated $90,000. A new brochure for the hotel shows a rooftop swimming pool and sundeck set in a tropical garden surrounded by lanai guest rooms and suites, all signature Williams’ features. It also noted that every guest room was air conditioned and had a television. Besides a new guest wing, banquet room area, and parking garage, the hotel had a redesigned entrance and modern signage.

Unfortunately, these improvements could not stop the neighborhood’s decay or the end of the Knickerbocker's cache. In 1970 another renovation project converted the hotel into senior housing and it continues in this capacity today.