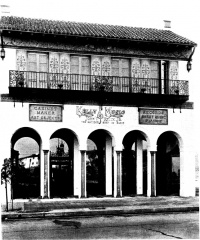 Arthur Letts was a Los Angeles entrepreneur who helped shape the 20th century residential and commercial landscape of Southern California. Founder and financial backer for several area department stores, he was keenly interested in creative land use. In 1919 Letts purchased 3,300 acres of rough ranchland in what is now the Westwood-Beverly Hills area. He planned a number of innovative developments for the area—large residential estates; smaller homes for an emerging middle class; clusters of low-density commercial businesses; and the Los Angeles State Normal School campus. His death in 1923 did not end these plans. Harold Janss (Letts’ son-in-law) and brother Edwin Janss completed the development scheme. In March 1925, the University of California Regents voted to move the Normal School, now officially a part of the University of California system, to a 383-acre property on the site Letts had originally proposed. On September 21, 1927 UCLA’s “Director Ernest Carroll Moore turned the first shovelful of soil” for the campus. In newspaper photographs Harold and Edwin were prominent among the “witnessing” dignitaries. (Marc Wanamaker. Westwood. 2010)

To support campus and student life around the school, Letts had planned a unique commercial district—Westwood Village. To insure his vision of a district with a unified aesthetic and high quality construction, the Janss Corporation hired top American urban planners and architects to create a master plan. Working with various Los Angeles County boards, the group drew up a plan of action and street grid. All proposed buildings in the Village would conform to Mediterranean Revival or Romanesque architectural style to compliment the buildings under construction on the new UCLA campus. Restricted to two or three stories in height, a prescribed color palette, red tile roofs, controlled signage and underground utilities, Westwood Village would become one of the first planned, mix-use districts in America. Many prominent Los Angeles architects submitted designs to the Janss Company for commercial and residential buildings including: Gordon Kaufmann, P.P. Lewis and Paul Revere Williams. (Los Angeles Conservancy. September/October, 1989)

In 1929 Paul Williams presented his design for a new branch of the popular Kelly Music Company. Moving to the “Town made for the Gown” was a natural step for the music store. (Southern California Business. March, 1930) With stores in Los Angeles and Hollywood, Kelly Music specialized in selling musical instruments, phonograph records, printed sheet music and the publication of original music scores. By expanding to an area near the developing UCLA campus, the company was following its young, affluent customers.

In April 1930 the Janss Company celebrated the first-year anniversary of Westwood Village with fire works, fiestas and birthday cake. After only one year the district had grown to 55 businesses valued at nearly $2 million, an amazing accomplishment during the Great Depression. An article in the Los Angeles Evening Herald (April 5, 1930) speculated on the reasons for the district’s phenomenal success. With its modern, innovative blend of pedestrian and automobile access, the newspaper announced Westwood was a development whose time had come. In a modern, streamlined age Westwood Village was a place “on the move” fueled by the enthusiasm of young people and Letts’ innovative land use ideas.