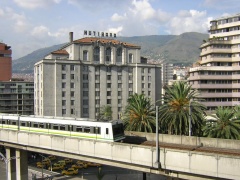 Named after the birthplace of Spanish explorer Hernan Cortes, the city of Medellin, Colombia, went unnoticed for 300 years. Modern aviation transformed the hard-to-get-to settlement into a mid-century capitalist paradise whose population was known for thriftiness and “feverish commerciality.” (Life, September 29, 1947) Home to 3 million residents, the city changed over night from a backwoods center for coffee trade into the modern industrial hub for the western coast of South America. To control urban sprawl and preserve the original aesthetics of the city, in the 1940s governmental and social leaders devised a master plan to remake Medellin into a “brisk” modern city of new avenues, parks, workers’ housing and business buildings without sacrificing its architectural past. Under the supervision of a special city department, all new business buildings would be designed in the prescribed South American modern-style. Paul R. Williams’ design for the Nutibara Hotel (1945) would be an integral part of the city’s new design direction. It would also be the first "large-scale" hotel built in the city. (Colombia Reports. April 22, 2014)

When the original idea for the hotel was suggested in 1937, Nutibara was not a city of millions but an isolated, unsophisticated place with less than 1150,00 inhabitants. Local developers understood the region's potential and proposed building a luxurious hotel to anchor the future business hub. They envisioned a spectacular resort with delux accomodations rivaling Miami or Los Angeles, scores of shops and restaurants to attract the "upper echelons of Columbia society" to their  locale. Recognizing the hotel's importance, the Columbian government agreed to shelter it from taxes for the next decade.

Construction of the twelve-story, reinforced concrete and terrazzo covered hotel began on April 22, 1938. For the next four years Williams and his team solved a myriad of engineering and logistical problems. Working in a foreign country without familiar building materials proved especially difficult. (Eventually 90,000 bags of cement transported from the United States would be used in construction.) Delivery delays for specialized hardware, the elevator system, 204 telephones and 4,000 pieces of custom rosewood furniture meant more time and additional costs.

When construction began, locals still panned for gold in the river bed flowing in front of the building site. Williams, faced with this and many other customs, chose to celebrate and preserve as much of the Colombian flavor as he could in his design scheme. To preserve the river he devised an elaborate concrete cover for the waterway creating a landscaped, tree covered plaza that became an instant urban landmark. With an abundance of native Colombian plants and a climate like California's, Williams blended the hotel’s outdoor and indoor spaces. Walls of glass formed an invisible separation between Nutibara’s lobby, the extensive gardens and the three plant-filled patios overflowing with azaleas, thousands of orchids, tropical bougainvillea and a purely Colombian touch—banks of coffee plants used as greenery. Terraces on the higher floors provided guests panoramic views of the city of Medellin. (Southwest Builder and Contractor, December 21, 1945)

The luxurious Nutibara Hotel was Williams' interpretation of the new South American modern-style architecture mandated by the Medellin city planners. The hotel’s design was “citified because it has a skyscraper tower for the rooms and countryfied because the public rooms downstairs rambled around a patio, swimming pool and gardens and parks.” In place of the large, formal, dramatic lobbies of his California hotels, Williams created public rooms for the Nutibara that were intimate, light filled, and cheerful reflecting the Medellin tradition of quick personal business relationships with deals sealed by an embrace and a handshake instead of formal legal documents. The final hotel design was 20th century modern yet Williams included enough of a “Spanish touch to keep the Colombians happy.”  (Los Angeles Times, April 14, 1941)