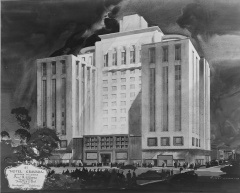 In a 1941 newspaper column Tom Treanor wrote, “Colombia, the last place in the world you would imagine such a thing will have a newer hotel and buildings than we have in all the United State. Mr. Williams says the last big new hotel in this country was the Waldorf-Astoria in New York … Colombia has something on us. There hasn’t been a thing of that sort here since the depression got in its early hard licks.” (Los Angeles Times, April 14, 1941) While many of Treanor’s American readers might not know Colombia's location, Paul Revere Williams had already made numerous trips to that country by 1941 even opening an office in the capital Bogotá to coordinate his many design commissions.

This architectural rendering by Robert Lockwood (image 1) depicts one of Williams’ most ambitious design projects in Colombia: the proposed 14-story addition to the 1920s Hotel Granada, dean of Bogotá hotels. Located at 8,700 feet above sea-level and limited by poor roads, the city posed numerous design challenges for Williams. Using locally available materials and natural resources, Williams relied on reinforced concrete for the hotel’s exterior, finishing the first floor public areas in imported marble. The end product was a bit of California glitz and glamour with a decided South American flair.

The drawing shows the building’s South American Modern-style. Adjoining the original six story structure on Parque Santander, the new addition was described as a “de luxe hotel of very impressive size and grandeur … This will serve to focus the social and travel life of Bogotá as the present Granada has long done. Geographically both are in the Capital’s center of center.”  (Sydney Clark All the Best in the Caribbean, 1948) When completed the hotel complex covered an entire city block, had 310 guest rooms, a number of apartments for permanent residents, two night clubs, four bars, four elevators, and twenty shops. (Southwest Builder and Contractor, December 21, 1945) Similar to Williams’ design for Saks 5th Avenue in Beverly Hills, the Granada had a large basement extending under the street for parking, an unusual feature for buildings in Bogotá.

Williams’ imposing addition to the Hotel Granada was a social and economic success living up to the owners’ expectations (Hotel Granada Corp. of Bogotá). The older, original section of the hotel became an annex and Williams' unit became the chic gathering place for the elite of the city and country. The Granada was a symbol of wealth and entitlement to the city’s poor and restive political opposition groups. On April 9, 1948 Hotel Granada was heavily damaged during 10 hours of violent riots, known as the Bogotazo (image 2), following the assassination of presidential candidate Jorge Eliecer Gaitan. Fires spread across downtown Bogotá destroying or damaging important social, governmental and religious landmarks including the Hotel Granada. Until 1958 Columbia would be plagued by national violence. In 1951, without explanation, what remained of the Hotel Granada complex was demolished and replaced by the new modern headquarters for the Banco del la Republica.