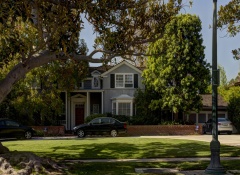 La Mesa Drive, known as one of the most elite addresses in Santa Monica, is a six-block long, curving street of thirty-seven large, architecturally significant homes built in the 1920s and 1930s. The drive is famous for its mature canopy of Moreton Bay fig trees as well as the high quality of the architecture. The firms of Marston Van Pelt and Maybury, Palmer Sabin, Oscar Niemeyer, and Lloyd Wright all designed homes on the drive.

In 1939, Paul R. Williams designed two homes near each other on the street, one for newly widowed Mrs. William S. (Ella May) Warfield at 2201 La Mesa Drive and this modified Georgian Revival-style house for Charles H. Hess, the retired president and manager of the Hess-Mallory Wholesale Dry Goods Company of Sioux City, Iowa. (Los Angeles Times. September 25, 1942) Hess and wife, Edith, moved frequently during their long marriage and chose Santa Monica for its beauty and temperate climate. Their residence, located at 2209 was completed at a cost of $18,000 and was spacious enough to accomodate the couple, as well as a daughter, son-in-law and their maid Anna. (U.S.Census data 1940)

Both the Hess and Warfield homes were added to the Santa Monica Historic Resources Inventory in 1983.