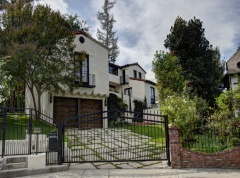 The emergence of Los Feliz as a choice Los Angeles residential area was slow. Though promoter Harvey Wilcox designed his development with wide paved streets and large building sites, he had little success selling the lots through 1900. The few buyers were wealthy Midwestern “snow birds” attracted to Southern California’s temperate climate and the area’s quiet isolation from urban Los Angeles. By 1910 only 29 homes were completed and these were architectural clones of the large residences the newcomers left behind—Victorian, Queen Anne and Mission Revival-styles. (1910 U.S. Census)

Within twenty years Los Feliz, with its proximity to the movie studios in Hollywood, became a prime residential choice for mid-level Hollywood. With a younger, more affluent homebuyer, residential design tastes changed and construction prices exploded. In 1927 one of these potential “younger” buyers was Lawrence Gray who wanted a modern home to share with his parents, Henry and Mamie. He contracted with Paul R. Williams, an acknowledged designer in the popular Spanish Colonial Revival-style, for a home that would cost the actor $19, 860 to build. (B.P. 19032, 07/06/27) (http://ifla.org/news/2008/SilentFilmsEra/SilentFilmEra.shtml)

Larry Gray’s professional success was not the typical fanzine story of sudden discovery by a studio talent scout. Beginning in the 1920s as a production superintendent for Famous Players-Lasky, he moved to the front of the camera aided more by luck than plan. Gray admitted to an interviewer after his first big film success “that he was never overly proud of his former work.” He appeared genuinely surprised by his achievement and admitted “I never sang in public before … I felt if I could only get into a scene I’d be all right. Some way or other I pulled out of it.” (Los Angeles Times. September 1, 1929) Though he had only a “passable tenor voice” and no stage experience, Gray was naturally suited for talking films. At ease before the camera, he had a “screen personality” that more than made up for his lack of training or artistic ability. (Richard Barrios. A Song In The Dark. The Birth of the Musical Film. 1995) During his brief career Gray appeared in 45 forgettable films with many rising young starlets. In 1936 Gray quit acting and returned to production work.

Gray was known in the film business as a dependable “player” and to the public as a dotting son. Throughout his Hollywood career he lived with his parents or his mother until his marriage in 1935. After visiting the houses of friends and colleagues, Gray became enamored with Spanish Revival inspired homes considered the height of architectural fashion. Gray purchased a lot in Los Feliz, a lot that would eventually have spectacular views of the Griffith Observatory and the Hollywood sign. He gifted his father the completed home. (Henry Gray was listed as the legal owner until his death in 1932.)

In comparison to other celebrity homes built at the time in Los Feliz, the Gray residence was modest—two story, 9-rooms with attached garage. (Before the Great Depression any residence in Los Angeles costing over $15,000 was considered up-scale though many estates built for studio heads cost more than $500,000.) Working closely with the Grays, Williams designed a home that had the look and feel of old California, but included the latest engineering conveniences: large hot water tank, deep kitchen sink, disappearing screens and modern furnace. The exterior and interior stucco finishes, handmade roof tiles, hardwood flooring, brick fireplace, custom wrought iron banisters and accents and the arched doorways were important historic elements. Along the back of the home Williams designed a loggia with large clay tiles on the floor and walled with arched pane windows over-looking a terraced landscaped garden.

His father died in February 1932 and Larry married Luisa Figueroa three years later at a small family ceremony at the Ambassador Hotel. Though his friends believed he might remain a bachelor forever, after the couple was introduced by film actress Dolores Del Rio a “romance blossomed into an engagement.” (Los Angeles Times. August 8, 1935)