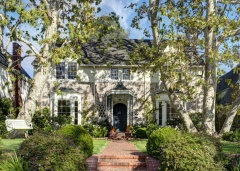 The Hancock Park area of Los Angeles has been described as a monument to Los Angeles’ social establishment. In the 1900s, the Hancock family made its fortune from the oil under their vast 4,438-acre rancho. By 1915 with reserves and revenues declining, G. Allen Hancock sought to diversify the family’s business holdings. To increase revenues, he hired construction engineers and noted landscape architects to develop a plan for a park-like subdivision to be built on a rancho section closest to Los Angeles—Hancock Park.

G. Allen insisted on a strict “deed covenant” for this development. (Covenants were common across the United States and remained enforced until courts decreed them unconstitutional.) The Hancock Park covenant had many restrictions including a stipulation that a professional architect must design all residences. Buyers agreed to predetermined set backs, hidden utilities and unobtrusive driveways and outbuildings. The subdivision’s governing board also maintained the right to veto sales to “undesirables,” especially racial or religious minorities and some celebrities. These guidelines gave the “subdivision the stamp of permanent beauty and desirability” assuring a potential buyer of the safety of his investment. (Los Angeles Times. April 18, 1920)

By 1930, 80% of the sites were sold, many to members of the petroleum industry. (Hancock Park Preservation Plan-November 8, 2007) One of these buyers was Sarah Belle Goodwin, widow of James Franklin Goodwin, manager and owner of Pinal Dome Oil. Sarah wanted a comfortable, tasteful family home reflecting her style and place in Society. The resulting Colonial Revival style home built on South McCadden Place represented her traditional values. To design her home she selected one of the regions best-known practitioners of revival design, Paul R. Williams. In 1930 Mott Studios photographed the Goodwin home for a feature in the popular interior design magazine, Architectural Digest (8:3 pp100-103, 1930).

James F. Goodwin was a gifted entrepreneur. Born in 1855 in the Nebraska Territory his family traveled by ox drawn wagons to California. As a young man James settled in the Santa Maria area of Santa Barbara County. He believed the town of only 50 people had great possibility and bought thousands of undeveloped acres. In a short memoir printed in the Santa Barbara News in 1926 (May 22), Goodwin remembered his early hectic life in Santa Maria. With little capital but big ambition, he bought a “variety store and butcher shop” (1878), incorporated the Bank of Santa Maria (1890) and also acted as town Post Master. Looking at the empty, windswept landscape he saw potential and began his life’s passion. Calling himself a “Tree Missionary,” Goodwin planted thousands of trees at a cost of 4/10 of a penny each. Looking back on his efforts, he wrote that his forestation “has so modified the winds that no one could wish to live in a more delightful climate than we now have.” This astute businessman also recognized the potential for the oil under his land. By the 1920s Goodwin was a power in the petroleum industry but he wrote that much earlier he had experienced “the most important event of my life… on July 11th, 1883 when I married Sarah Belle McGaugh.” Together they raised a family of three children eventually moving to Los Angeles for James to supervise his growing petroleum interests.

Sarah and Bessie knew what they wanted and worked closely with Williams as he designed the two-story, brick and wood residence. In the 1930s a typical illustrated feature in Architectural Digest included floor plans and the names of professionals involved in a project: the architect, landscape designer, interior decorator, lighting or furniture designer and builder. The Goodwins’ list in AD also included a well known landscape firm and elite builder (Howden and Howden) but no interior designers. Unlike the highly staged rooms shown in period interior magazines the photographs of the Goodwin residence shows rooms that are warm and inviting with furnishings that “real” people, including teenage boys, used. A large covered porch with comfortable all-weather furniture led to a private landscaped back yard. (The current owners were attracted to the home’s warmth and livability.) Except for modern updates much of the original house remains.

Sarah and her extended family lived in the house until her death in 1946 when Bessie inherited the home. Bessie was active in Society and was known as “sweet and gracious, so willing to give of herself.” (The Clubwoman. California Federation of Women’s Clubs. 1922) The Goodwin residence remained an inviting meeting place for generations of Los Angeles clubwomen and new debutants.