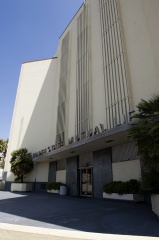 Founded on July 23, 1925 by William Nickerson, Jr., Golden State Mutual (GSM) was the largest black-owned insurance company west of the Mississippi and was for many years the only African American owned corporation in California. (Los Angeles Times Magazine. May 31, 1931) Starting with only one employee besides Nickerson, the company experienced rapid growth. After two years the major stockholders decided to build one large building to house their headquarters to be located on Central Avenue. As the center of African American social and commercial life in Los Angeles, the owners' decision to place their company's first home on Central symbolized their ambitious vision for the future. A sign raised on the lot announced: The Future Home of Golden State Fund Insurance Co. Will Be Erected On This Site. (Insurers of the Dream. unpublished manuscript) Though GSM started on a shoestring, their completed Spanish Colonial Revival style office (1928) represented the company's arrival as a community power. The Board of Directors selected James H. Garrott, the second licensed African American architect in California, to design their new building.

By 1946 GSM had out-grown the original location on Central and the Board of Directors voted to build a large, new home office on Adams and Western Blvds, one of the "most attractive business corners outside of downtown Los Angeles." (Insurers of the Dream. unpublished manuscript). An important bus transfer point, the location was convenient for both employees and customers. Moving west the company acknowledged an end to the important role of the Central Ave corridor to the African American community and the "breaking out of the barriers imposed by segregation and discrimination." The Directors selected Paul R. Williams to design the new modern building. "It was said that his name on a set of plans was the finest trademark in the field of architecture!"

Williams "planned the building around the way the company operates." An auditorium seating 400, with media systems and special lighting controls, a cafeteria for 150, a medical department with examination and recuperation rooms, and an employee lounge all illustrated the company's concern with the working environment. Alloting space for a library, printing, administration and in-house training of agents proved how far GSM had come as a company. (images 15-18) The five stories had room for 300 employees to work comfortably and would allow for any expected future growth. The final cost was $956,000 with the furnishings adding another $107,000.

The new Golden State Mutual was officially dedicated in a week long grand opening in August 1949. Over 10,000 toured the building, including corporate officers, California Governor Knight, State Insurance Commissioner Downey, and architect Williams. George Beavers cut the ribbon and the Governor was the first to step through a flower decorated horseshoe. During the dedication a cornerstone was laid with a time capsule placed inside. The time capsule was to be opened on the company's 75th anniversary in 2000. (Insurers of the Dream. unpublished manuscript)

Though the new GSM headquarters were spacious with the latest in midcentury furniture and technology, the feature the company was proudest of were the history murals commissioned for the lobby. (images 9-14) For board member Norman Houston the purpose of the murals was "...to instill in our young people the knowledge that they had a lot to do with the building of our state." Painted by Charles H. Alston and Hale A. Woodruff the large murals represented African American contributions to the history of California from 1781 through the founding of Golden State Mutual.

The eighty items sealed in the time capsule were a sample of what GSM valued in 1949—portraits of the founders, letters, brochures, the corporate seal and newspapers of the day. Poignantly the capsule also contained a resolution directed, "to our successors in the year 2000, setting forth the founding principles of the Company that they may be imbuded with the spirit of the founder which has motivated us to build with service, to fulfill every promise made under a contract, to give fair and honest service without regard to race, creed or color... by the most efficient management possible."

Sadly by 2010 both the company and the building had closed.

Images 7 and 8 show some of the important members of the African American community in Los Angeles who attended the opening dedication including Charlotta Bass, owner/publisher of the California Eagle, shown here with Golden State cofounders Norman O. Houston and George A. Beavers, Jr.

Special thanks to Joshua Solomon for his help with accessing GSM records and information.