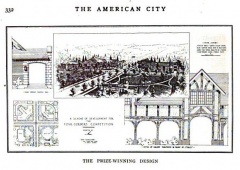 In 1912 Paul Revere Williams graduated from Los Angeles Polytechnic High School and began his quest to become an architect. Working for important landscape designers and architects in the Los Angeles and Pasadena areas he learned the importance of including in his designs space for both outdoor and indoor living. Williams’ prize winning submission for the Four Corners Competition sponsored by Throop College of Technology (now California Institute of Technology) in 1914 illustrates some of his early design solutions for common city/neighborhood planning problems.

The Four Corners Competition was an outgrowth of a real problem existing in an affluent Pasadena neighborhood. Lack of zoning or other building restrictions had led to the construction of what was described at the time as an “unsightly shack … erected upon one of the prominent corners in a fine Crown City residence district and rented by a fruit vendor.” (The Survey XXXIII 1914-1915) The design competition grew out of the residents’ desire to find a solution to save the other corners from similar uncontrolled development. A panel of the most important regional architects was selected to judge the competition including John C. Austin, Elmer Grey, and Albert R. Walker and the prize money determined. Paul R. Williams submitted his entry along with scores of others from across the country.

Williams’ winning design shows a mixed use plan for the corners including retail stores, an apartment, neighborhood church/ community home and a combination park and fire station. Williams down-played the commercial nature of his trading center by setting the stores back from the street, providing delivery and automobile parking areas in the rear of the buildings, and creating pleasant landscaped walk areas for patrons. His apartment building had a homelike appearance with extensive space for a front lawn, playgrounds, and a flower garden in the rear. By including both a church and community house Williams suggested the “possibilities of cooperation in religion and recreation, which might well be considered in every neighborhood.” Setting a fire station in a park would allow the firemen “... to spend their surplus time pleasantly and profitably in maintaining the flowers and lawn in the park.”  Williams’ unified design showed that there could be many uses for valuable real-estate without upsetting the upscale neighbors.

For his design work, Williams won $200. Most importantly he came to the attention of an important future mentor and employer John C. Austin.  After judging a number of Williams’ designs, Austin would offer him a position in his firm where Williams would help with the design of many important public and institutional buildings in Los Angeles.  While working for Austin, Paul R. Williams would pass the state of California licensing examination in 1921 and shortly after open his own architectural practice.