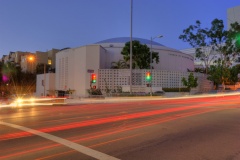 Dr. Ernest Holmes founded the Church of Religious Science in California in 1932 based on teachings in his book The Science of the Mind (1926). Though originally not in favor of creating a formal church, Holmes and his followers eventually formed the Institute of Religious Science in 1927. By the time he died in 1960 the church had grown to 100,000 members, worshiping in 62 churches across the country. Both he and his wife, Hazel, would devote their lives to their religious work.

Dr. Holmes defined Religious Science or Mind Science as a "correlation of laws of science, opinions of philosophy and revelations of religion applied to human needs and the aspirations of man." (Los Angeles Times, April 8, 1960) His philosophy of positive mental attitude and prosperity consciousness had great appeal to Californians and "underlies much of what is found in business success literature and financial seminars." (Hindson. Popular Encyclopedia of Apologetics. 2008) Hollywood celebrities embraced his church and its teachings. Mid-century American food guru Adelle Davies was a member and described what had originally attracted her to the congregation, "It's the only church that doesn't turn me off completely. It never, never, never uses the word 'sin' " (Life. Octobr 22, 1971)

In an article published in Science of Mind, Paul R. Williams described Ernest Holmes as "a great spiritual leader and my valued friend." (May, 1962) The church's emphasis on positive attitude appealed to Paul Williams and he began attending services, lectures and classes led by Holmes. Williams said he often left them "with something that would really benefit me during the week." The two men became close friends.

In 1957, Dr. Holmes asked Williams to submit a sketch for a new church building and Williams quickly drew a circle. Holmes immediately saw that the elliptically shaped church building he proposed was the perfect symbol for the wholeness, unity, unending and all-inclusive power of love basic to Science of Mind teachings.

According to a series of 1959 articles in the Los Angeles Times, the building was slated from its inception to be a notable religious structure in Southern California. The reinforced concrete dome would suspend to a height equivalent to 4-stories over the main auditorium that was 100 feet at the widest dimension. The ground floor was designed to accomodate 1050, with an additional 313 in the balcony area. (January 11, 1959) Another unique feature was the inclusion of facilities for closed-circuit television a new technology in the 1950s. The Church would be centered in a lush garden to surround the congregation in greenery with sculpture featuring the great philosophers of history. (Images 13, 14 and 16) "A 14-foot high pieced cast concrete screen wall will enclose the garden on the street side." (Image 8)

The total cost of the Williams' three phased construction program was $3.5 million with the church alone costing $1 million.