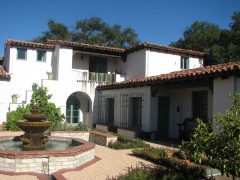 William Ford was a successful businessman from the Midwest with an impressive resume and eclectic interests. Inheriting his father’s insurance empire, he used some of the capital to found the Ford Plate Glass Corp. becoming an important figure in the production of modern industrial glass. Later he was appointed president of the Bolsa Chica Oil Corporation after the unexpected death of its founder and his friend, Irving Augur. Though his primary residence was in Ohio, Ford had a number of homes across the country including a working cattle ranch in Montana that was rumored to have the world’s largest herd of Holsteins. One of his favorite retreats, however, was his winter estate in Ojai, California. (Sheet Metal Worker. Vol. 26 1935)

After WW I Ojai (originally named Nordhoff) became a winter destination for many American millionaires looking for healthy air and a temperate climate. In 1908 Edward D. Libbey, a glass manufacturer from Ohio, bought a large tract of this undeveloped land and commissioned Myron Hunt to design a Spanish-revival style home for his property. (Libbey continued to add to his home, hiring Los Angeles architect Wallace Neff in 1923 to design an elaborate stable complex.) In 1917 after fire destroyed much of Nordhoff, Libbey personally oversaw its revitalization to recreate his “version of castles in Spain.” (Westways. July, 1937) Libbey hired the architectural firm of Mead and Requa to implement his ideas. The town of 500 officially became Ojai in 1921 and Libbey began promoting its livability to many of his friends and colleagues. Among those who followed him to Ojai were Irving Augur and William Ford. Auger and Ford selected Paul R. Williams to design their winter residences.

Architectural “revival styles” were the rage in Southern California before WWII. Spanish Colonial dominated both commercial and residential construction. With its characteristic clay tile roof, arches, balconies and stucco-like finishes, the style was believed to compliment California’s moderate climate and outdoor living. Ford commissioned Paul Williams in 1928 to plan a residence sympathetic with Ojai’s new aesthetic. Williams was already recognized for his mastery of the revival genre. Williams used period styles as inspiration and skillfully combined the “historic” with modern function, current technology and client lifestyle to create a unique home.  The Ford “hacienda” built around a landscaped courtyard (image 2) with a tiled 3-tiered fountain and rooms with panoramic views of the Ojai Valley was his design for this family. (Architect and Engineer. March, 1946)

Ford purchased property in Ojai’s Country Club Estates and his 16-room, 14,000-square-foot home was the first built in the development. While Ford wanted his home to have a hertitage look, he insisted on the latest modern building materials and gadgets. Williams, a master of architectural disguise, successfully concealed the modern features behind white paint, plasterwork, wrought iron details, wooden shutters and thousands of handmade decorative tiles. (San Valle Tile Kilns featured photographs of the house in its print advertisements.) Using concrete blocks on the exterior, Williams and the contractor created the impression of aged adobe brick. The result was a new home with an instant California pedigree.

“This artistic country home is designed in Antique Spanish Architecture to harmonize with the magnificent surrounding scenery.” (Southwest Builder and Contractor. May 2, 1930)

The Ford residence was well known throughout Southern California for its comfort, beauty, extensive outdoors entertaining areas and natural setting. Though Ojai was located in a rural California outpost, the house included a tennis court, swimming pool, elaborate outdoor areas for entertaining and Blackburn’s Disappearing Rollup Window Screens. Images of the house appeared in popular contemporary magazines as an example of ideal California living, attracting both the wealthy and those aspiring to live like them to Ojai.

William Ford died in Ojai within five years of completing his home. The Los Angeles Times reported, “He had been ill only a few days, having suffered a stroke after returning from an eastern business trip.”  (May 3, 1935)

Thanks to historian Charles J. Fisher for his insights into the Williams Ford residence and use of his images.