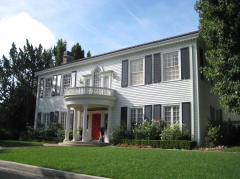 A young Paul R. Williams often accompanied his foster father Charles Clarkson downtown where Clarkson worked. Williams sold newspapers at the corner of First and Spring, and even at this age was recognized as a quietly confident young man. One person who regularly bought a paper and remembered Willliams was Frank Putnam Flint. (image 2) Flint would be elected a U.S. Senator and was recognized as "a leader in many national and California affairs." (Los Angeles Times. February 14, 1929)

In 1915 Flint became president of the Los Angeles Investment Co., one of the largest land development companies in the area. One of the initial projects of the company was creating a wealthy suburb near Pasadena. At that time a Pasadena address was one of the most prestigious in Southern California. Flint hoped his new development would eventually become a part of Pasadena. Not a man of modest dreams, his plans for "the Switzerland of America" included an upscale hotel, country club, and an equestrian center. When Flint began planning the 1,500-acre residential aspect of Flintridge, he decided to give the young architect, Paul R. Williams, the job of designing many of the first homes in this upscale community.

After he became a licensed architect in 1921, Williams designed scores of the homes either directly commissioned by Flint or as a result of Flint’s referrals. (Southwest Builder and Contractor 6/10/1921) Eventually the Flintridge area would have one of the largest concentrations of Williams' designed residences in Southern California. At least ten of his designs were either model homes or spec projects commissioned by Flint. Today a "significant" number of the architect's Flintridge projects remain unidentified and Tim Gregory, a noted regional architectural historian, fears many have been demolished. (Personal communication, Tim Gregory.October, 2013)

In 1914, Frank Flint commissioned and had built a personal residence in his favorite architectural style: a romanticized vision of a southern governor's mansion. After the Senator died suddenly at sea during a round-the-world cruise, his wife Katherine commissioned Paul Williams to design this smaller version of the original residence in 1929. She would continue to live in the house until her own death.