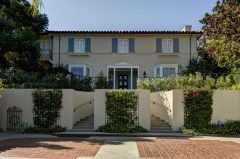 “...M. Rene Faron, who has selected a hill-top from which his home will have an uninterrupted view from ocean to mountains...” (Los Angeles Times. March 17, 1935)

In the 1920s Rene & Jean: French Table d’hote opened as a small family style French brasserie in downtown Los Angeles. As the menu developed and the ambience and service became more sophisticated, the restaurant expanded to multiple locations in Wilshire and downtown. Proprietors, Rene Faron, Leon Bevillard and Jean Ibert became known for their “white cloth service” in a cozy setting. Promoting their culinary philosophy of Bonne Cuisine, Good food the secret of our success, the three men introduced generations of LA diners to a first taste of Continental food. Their “blending of a strictly French cuisine with the American enjoyment of choice …” proved popular with their clientele. For thirty years the growing middle class of Los Angeles considered a dinner at Rene and Jean the ultimate romantic destination. (Los Angeles Times. April 26, 1935)

In 1934 Rene & Jean celebrated its eighth anniversary and the reopening of the West 7th location after an extensive redesign. “An entirely new front greets guests while accommodations for diners has been increased to 250 persons.” Though America was still in the midst of the Great Depression, the three Frenchmen committed $25,000 to their extensive “remodeling program.” (Los Angeles Times. October 26 and November 13, 1934)

To celebrate his business success Monsieur Rene L. Faron, president of the company, purchased a residential lot on Redcliff Street in the Moreno Highlands tract area near the Silver Lake Reservoir. Close to downtown, with outstanding views and elevations, undeveloped sites in the popular area were scarce and the remaining land often had difficult topography. Designing homes for Moreno Heights challenged even the most experienced architect. To successfully design for the terrain, architects educated themselves in the latest “engineering techniques that allowed the houses to be perched on the edge of hillside lots that were previously considered to be unbuildable.”  (SurveyLA)

In the mid 1930s, Paul R. Williams was well known for both his ability to design homes with an instant historic presence and for placing houses on difficult topography. Many clients believed his designs complimented natural views better than other regional architects and Faron wanted a sophisticated revival style home. He believed Paul Williams was the best architect to solve both the design and engineering problems.

Working with Rene and his wife Anna, Williams designed their two-story American Colonial Revival-style home with simple lines and classical detailing. Solving the problem of a hilly site, Williams created a retainer wall and placed the two-story house above and setback from the wall. A graceful, curved, double-stair with iron railing was built into the wall and leads to a temple-like front entrance typical of this revival style. (Williams placed the garage with a brick paver “grand motor court” below.) Custom ironwork gates, curling iron details at both the front door and rear garden and the curved metal work banister in the front hall are unusual Mediterranean touches. Anna wanted the masonry exterior painted pink.

Described as “elegant” and “traditional” the house was well suited for a restaurateur who successfully blended a Frenchman's sensibility and taste with an appreciation for the American enjoyment of bending the rules.