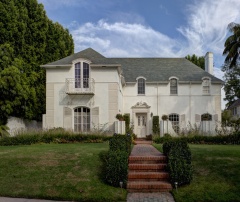 “The Gabriel Duques (she was the lovely Mary McAllister) are getting ready to move into their beautiful new French provincial house which Architect Paul Williams is building for them.” (Los Angeles Times. January 29, 1933)

Hancock Park, developed in the 1920s, was a natural choice for Mary and Gabriel Carlos Duque's residence. Often referred to as a monument to the Los Angeles social establishment, Hancock Park attracted both the senior and younger members of important families. The deed covenant mandated that buyers agree to a number of restrictions including employing a licensed architect to design their home. Generous setback (distance between residence and street), concrete-paved roads, utility lines at the rear of the property and hidden garages assured potential buyers that the area would retain value and design integrity. Initially listed for $10-$15,000, the lots were 80% sold by 1930, and the majority of construction completed by 1942. (Resnick Co. Hancock Park Square: A Marketing Pamphlet, 1973) Hancock Park became a showcase for work by elite Southern California architects and the setting for their eclectic interpretations of historic revival styles.

In the 1930s Paul Williams had already established himself as a master of period design. His ability to adapt many historic styles to the temperate California climate, modern technology and the demands of his affluent clientele helped grow his practice during the Great Depression when other architects failed. Though his newly rich Hollywood clients might need his steady hand and counsel to keep their ideas “within the bounds of grace,” his old-line patrons inherently understood his aesthetic philosophy —“Good design is a pleasing assemblage of parts; and not the assemblage of pleasing parts.” (Los Angeles Times. October 11, 1970) Gabriel and Mary were a part of the city’s establishment and they hired Williams to design a tasteful residence on North Las Palmas Avenue to serve as a backdrop for a life of ”graceful“ entertaining—debutant meetings, teas, dinners and philanthropic tête-à-têtes.

The Duque family were important members of old Los Angeles’ society when Gabriel was born in 1890. Attending the University of California, Berkeley and Harvard Law School, he was admitted to the California bar in 1915 and continued his practice until a few weeks before his death in 1971. Described by his peers as “well equipped for the arduous work of his profession…” he become “prominently connected with legal affairs of Los Angeles, his native city.” (McGroarty. California of the South. 1933) An active participant in scores of social, civic, charitable, medical and educational organizations, Gabriel was best known as the doting husband to one of Southern California’s social and philanthropic leaders.

In 1927 the Los Angeles Times published a wedding photograph of Mary McAllister with the caption, “Modern Bride.” (November 13, 1927) Mary soon became the acknowledged leader of and a role model for the 20th-century California, hands-on society woman. For the next 50 years her cheerful energy, approachability and enthusiastic pursuit of her philanthropic goals awed her friends and supporters. Mary was one of the first women to raise large sums of money to improve the lives of children, especially crippled children. While many of her contemporaries were involved in glamorous and genteel causes — city beautification, music and the fine arts, the Rose Bowl Parade or the construction of the Coliseum — Mary’s passion was the Children’s Hospital of Los Angeles. At the time of her death in 1990, she had helped to raise more than $100 million to support the hospital. A fearless fundraiser she “solicited funds from people she barely knew to those she had known since birth.” (Los Angeles Times. November 27, 1990)