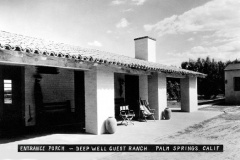 America’s fascination with cowboys and the West has been part of our popular culture for more than a century. Capitalizing on this interest, Hollywood film studios produced hundreds of movies that romanticized cattle ranching and cowboy life. Ironically the majority of movie executives, directors and scriptwriters making these Westerns were ignorant of western life but this lack of knowledge did not stop them from creating hosts of fictional film heroes. During the Great Depression, when ordinary Americans only dreamed of the excitement seen on the movie screen, the wealthy could experience the western life by staying at a dude or guest ranch.

Cattlemen supplementing their incomes with paying guests or dudes originated in the Dakota Territory in the 1880s. The modern western-themed “guest ranch” reached its zenith of popularity in the early 1940s in California where ranch-like resorts aggressively marketed themselves to the affluent in popular lifestyle magazines. Any pretense of providing an authentic cowboy experience was soon dropped as they stressed their country club amenities—heated swimming pools, shooting ranges, putting greens and “superb American plan cuisine.” The notion of being a “working ranch” vacation was quickly supplanted as resorts realized that “guest ranching” was a more “profitable masquerade for … adults who never grew up” than cattle ranching. (Arizona and the West. Summer 1968)

In Palm Springs the Deep Well Guest Ranch was a premier example of the western-themed resort. Esteemed as an out-of-the-way destination for Southern California’s “best-known people,” this resort provided privacy with views of “the desert in all its glory” and Western hospitality. (The Desert Sun April 11, 2015) With its Paul R. Williams’ designed campus, Deep Well became the destination for discriminating clientele who saw the ranch as an “ideal place for rest and recuperation among real home-like comforts and conveniences.” (Los Angeles Times. December 22, 1929)

Deep Well, originally a failed apricot farm, was rebranded as Deep Well Guest Ranch in 1928 by investor Charles Doyle. Doyle realized the property’s natural setting and proximity to Palm Springs were more valuable assets than its agricultural use. He marketed his “guest ranch” concept to hardy travellers through print ads highlighting its natural desert beauty and wholesomeness. The original lodging for 22 guests was a basic refurbished bunk-like fruit shed but the natural unspoiled setting and simple horse-centered activities enchanted guests. Described in marketing pieces as “an oasis surrounded by trees,” Deep Well quickly became a favored destination for rich and famous looking for an unconventional outdoor experience. (Guest Ranches: Along Lines of Southern Pacific. September 1, 1941 and Palm Springs Villager. February 1952)

In 1929 Doyle sold the property to the Everett family of San Francisco whose goal was to increase the ranch’s revenue by replacing the original rough collection of buildings with up-to-date accommodations. Their strategy of providing comfortable lodgings and modern amenities without sacrificing the ranch’s historic look and down-home feel proved successful. To implement their plan the family turned to Beverly Hills hospitality professionals, Frank and Melba Bennett and Los Angeles architect Paul R. Williams. The Bennetts brought proven expertise caring for affluent customers while Williams’ growing list of important Southern California clients made him a natural choice to design the resort’s physical plant.

Though local adobe buildings served as the inspiration for Williams’ Deep Well hacienda design, regional architects were enthusiastic about his innovative use of the traditional building form. (Deep Well was referenced in a number of major professional publications including a 1931 issue of Architecture.) Williams’ plans called for substituting concrete hollow bricks reinforced with metal rods for the locally produced and traditional sun-dried mud bricks. By painting the brick walls (inside and out), the building mimicked the look of old adobe but was more economical to build and maintain than mud. The hollow bricks also provided excellent insulation for the climate—cool in the hot desert summer and comfortable in winter “when occasional strong winds blow chilly blasts.”

In 1929 the Williams’ redesigned Deep Well Guest Ranch was completed at a cost of $150,000 and opened to much publicity and a weeklong gala party. (Desert Sun. February 23, 1930) The Los Angeles Times (December 22, 1929) reported that 125 socialites and Hollywood celebrities were invited to experience the facility. Invitees described their visit as “exceptional” and the staff of “competent cowboy guides” “pleasing and effective.” Though the resort had every modern amenity desired, Williams preserved “the natural and simplicity of open-air life” of the original resort. A unique communal space—The Barracks, a “rambling central building surrounded by ramadas, patios, cloistered walks and picturesque guest houses” created an informal atmosphere.

Deep Well’s reputation as an exclusive out-door vacation destination quickly grew after the Bennetts placed discrete advertisements in life-style publications touting the ranch’s “restfully secluded” location near the “mysterious desert.” (Los Angeles Times. March 29, 1929 and Guest Ranches: Along Lines of Southern Pacific. September 1, 1941) Though offering expected activities like trapshooting, swimming, tennis and hiking Deep Well’s emphasis on equestrian activities, earned it the popular appellation: home of horses in the desert. Movie stars and titans of industry, often wearing custom tailored western apparel, clamored to be part of the daily posse led by the resort’s cowboy staff through the surrounding canyons and mountains. (Niemann. Palm Springs Legends. 2006) The ranch would be regularly listed in popular travel guides such as the Duncan Hines Travel Book that recommended the “best places to eat and sleep” in America. (Desert Sun. February 8, 1961)

Proxomity to Palm Springs was both the beginning and the end for Deep Well Guest Ranch. By the 1950s improved highways and the expansion of air service helped make Palm Springs a popular winter residence for wealthy Americans from across the country. The Deep Well owners sold more and more acreage and residential developments soon crowded the ranch making it “difficult to maintain the old informal, simple atmosphere that everyone loved.” (Palm Springs Villager. February 1952)

In the late 1950s Deep Well Ranch was more valuable as vacant land than as a resort. Deep Well Guest Ranch would be rebranded as Deep Well Ranch Estates. Melba Bennett, daughter of the early resort mangers wrote of growing up at the ranch with its “breathtaking vistas and unique protection from the desert winds.” The same natural elements that kept guests returning to the ranch every season also attracted buyers for the residential lots. While these new buyers did not have “an alfalfa patch, nor Indian ponies grazing near their windows,” she was sure they would soon appreciate the land as “a most delightful place to call home.” (Palm Springs Villager. February 1952)