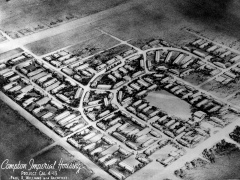 Companies, government entities, or individuals often request proposals from architects for projects under consideration, though the project may not always be funded. This sketch is an aerial view of Paul R. Williams’ proposal for the Compton Imperial Housing Project. Eventually this design would become Nickerson Gardens, a large collaborative architectural project. (Architectural Resources Group, Inc. Garden Apartments of Los Angeles, 2012)

In 21st century Los Angeles, Williams is often remembered by the public for his refined aesthetics, facility for adapting a variety of historic architectural styles to modern California living and his skill at tastefully managing the design aspirations of his wealthy clients. During his long professional life, however, he devoted much time studying the great need for socially responsible, affordable housing for all Americans and promoting a variety of solutions. This rendering for Compton Imperial Housing Project is an example of the creative energy he devoted to this pressing social issue.