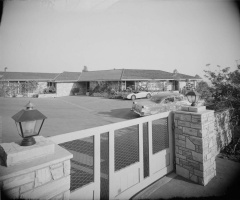 Los Angeles restaurateur and former vaudevillian Dave Chasen may have been a small man in stature but his ideas were big. Opening Chasen’s in 1936 as a chili and rib joint, Dave and his restaurant, redesigned by Paul R. Williams, were world famous by 1960.

When Chasen purchased a Los Angeles residential lot in early 1950 for himself and wife Maude, he was still thinking big. From the two-acre plateau in the hills above Sunset Strip, he could see “all the way from the San Gabriel Mountains to the Pacific Ocean, with the whole city of Los Angeles spread out in between.” (House Beautiful, March 2004) To design the ultimate Hollywood home with sweeping views of the city, he hired Paul R. Williams.

As a California architect, Williams’ designs were influenced by the temperate weather, the lifestyle of his client, and most importantly by the project’s physical location. One of Williams' residential design approaches was to walk the site and place the living room for the best view. But how could he select the one best view from a location with a three-hundred-degree panoramic view? (image 2) Williams’ solution was to design a 6000-square-foot home with a few over-sized rooms and walls of glass showcasing the “heart-stopping vistas.” The open floor-plan, multiple levels, interesting angles, curved walls, beamed ceilings (images 6-7) and native materials such as hand-split cedar shakes and Palos Verdes stone inside and out gave the home a modern California feel.

Maynard L. Parker took these black and white photographs of the Chasen home for the April 1959 issue of Town and Country. Parker's photos highlight both Williams' architecture as well as designer Edward F. White's complementary interiors. Images 3 and 8 show the guest cottage (removed) and swimming pool area that became known as the “Jeweled Pincushion” because of the dramatic views of the Pacific Ocean by day and the lights of Los Angeles at night. Williams extended the Chasens’ living space with a flexible-use pool area. By simply rearranging the furniture, this area can accomodate intimate family gatherings or large parties.

In 2004 the new owners of the Chasen home fell in love with the same views. They preserved the open, flowing Williams’ floor plan, updated the colors and modernized features. Characterizing their house as a home with a pedigree, the couple describe living there as a ”serene oasis at the end of the world, and yet we’re only minutes from the main drag. At night, we can lie in bed and watch the string of pearls – the airplanes landing at LAX in an endless shimmering line.”

2012 update: The Chasen residence was purchased by a new owner and the house razed.