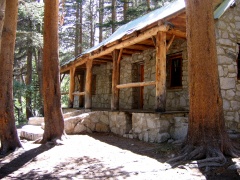 Most modern theatergoers believe it was Andrew Lloyd Webber who created the tragic hero of The Phantom of the Opera, but before the London or New York musical, there was the 1911 novel, Le Fantome de l’Opera by French author Gaston Leroux. An English language serialization of the novel eventually appeared in American newspapers. The graphic, illustrated serial caught the attention of an employee of Universal Pictures in California. His excitement over the cinematic potential of the story helped bring the Phantom to the screen for the first time in 1925. It would also make Lon Chaney, Sr., a movie star.

In a 1925 issue of Movie magazine, Chaney dismissed his amazing ability to transform himself into the first cinema vampire, the hunchback Quasimodo, or hundred-year-old villain Mr. Wu (image 3) using only makeup and body movement as mere “extraordinary characterization.” In truth, his skill with make-up along with a knack for pantomime made him a “natural” for the silent movies. Before the computerized special effects of the 21st century, it was Chaney who created our first movie monsters, and it is against his creations that we compare all the rest.

The rustic cabin (1929-30) that Paul R. Williams designed for Chaney in the California High Sierras, now John Muir Wilderness, was built as a vacation home for the star. Built under a government “special use” permit, Chaney owned the cabin, but only leased the half-acre of land. In 1929 the cabin site was hard to reach and was without a road for the last 1 1/2 miles. (A detail that complicated Williams' design.) The busy movie star thought his rustic home in the wilderness was paradise, "Tonight I start out for the High Sierra. No shaving, no makeup, no interviews for four long, lazy weeks ...We sleep under the pines and I try to climb high enough to reach the snows." (Los Angeles Times. June 7, 2003)

The 1,288-square-foot granite fieldstone building, now with a corrugated metal roof, was unlike anything Williams ever designed. Costing $12,000, the building had two-foot thick walls, a gable roof and kerosene lamp lighting. Though the interior was simple, consisting of one large living room and a separate kitchen, it had a number of Williams touches—a large granite fireplace, tongue-in-groove pine flooring and amazing views of a canyon and Big Pine Creek. Chaney and his family, all avid fishermen, had often camped at that site before the cabin was built, and they loved its location. The orientation of the building ensured that the views became an important design element. Unfortunately, Chaney spent only a few months at his cabin, dying in August, 1930 within a short time of its completion

The building was sold in 1932 and again in 1955. In 1980, after the special use permit expired, the structure became government property. For a number of years the Park Service considered different uses for the cabin and even studied its demolition, but soon realized that the amount of dynamite needed to destroy the granite structure would cause more damage to the environment than letting it stay. In 1982, the Park Service decided to nominate the cabin for the Register of Historic Places because of its relationship to both Chaney and Williams. It still remains on the list waiting for official designation.