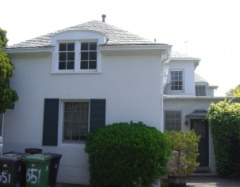 For the high-end Los Angeles real estate buyer, a Sandy Gallin renovatation is as prestigious as a Paul R. Williams' designed home. Both men are considered aesthetic tastemakers and understand the residential aspirations of rich and successful Hollywood. Gallin’s renovations for the A-list celeb home could come directly from a Williams’ blue print. ”Lots of windows and light, modern, outdoor California living…People really like the idea of a grand entrance. We have to have that.” (New York Times June 10, 2007) When Gallin purchased the Castera-Ward Bel Air residence in 2007 as a possible teardown, the “home flipper to the stars'” desire for profit conflicted with the local preservationists’ desire to save this 1936 residence designed by “architect to the stars,” Paul R. Williams.

Williams designed the two-story residence on North Siena Way in the popular French Provincial-style for George Louis and Evelyn Dupree Castera; one of the original “power” couples in the Los Angeles social and cultural scene. The Casteras were considered pioneer residents of Bel Air when they moved into this house. Evelyn's fortune supported their grand life style and George was the dashing Naval Academy graduate and successful businessman. While the two were prominent in their day, they would now be forgotten but for this house and for establishing the California Institute for Cancer Research (1945).

In 1960 Evelyn died and the house was sold to investment broker Edgar Ward and his wife, actress Jane Wyatt. Wyatt’s acting career spanned most of the 20th century and included theater, films, and television. Although she had leading roles in the 1930s film classic Lost Horizon and Elia Kazan’s Gentleman’s Agreement (image 2), Wyatt is best known for her role as “the perfect wife” Margaret Anderson on the long running TV sitcom Father Knows Best. Jane Wyatt became part of “Hollywood Fights Back” a 1940s coalition of film superstars organized to protect individual rights during the congressional McCarthy hearings or "red hunts.” Though this group failed to protect members of the film community from being "black listed" and denied work, Wyatt continued to find work in television.

Jane Wyatt and Edgar Ward lived together at their North Siena Way home for over thirty years making few changes. In 1971 wood decking was extended and a small exterior stairway added. After her husband’s death in 2000, Jane Wyatt lived in the house until her death (2006) at age 96.

The house was placed on the market in April 2007 and quickly purchased for $7 million by Sandy Gallin. Discovering Gallin’s plans to demolish the house and replace it with a larger contemporary residence, the Los Angeles Conservancy prepared a landmark nomination. In August of that year they were successful and the home became #893 on the City of Los Angeles Historic Cultural Landmark List. While Gallin promised to rehabilitate and not demolish the residence, he made extensive changes including altering the original front entrance, changing wall finishes and ceiling treatments, reconfiguring and modernizing the interior. A gym and wine cellar were  added raising the “flipped” price to $32 million.