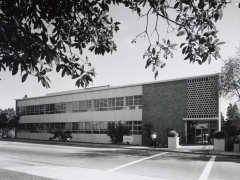 The Paul R. Williams designed Botany Building was completed in 1959 on the UCLA Westwood campus. As the executive architect Williams was responsible for the project's design, working drawings, specifications and supervision. Adjacent to the University’s botanical garden, the 35,700-square-foot concrete and brick structure was built for $854,577 and housed teaching and research facilities and administrative offices for the department. The glass-facade building was designed to "take advantage of the existing environment rather than change it." (Los Angeles Times. April 28, 1957)

Williams' placement of the two and four-story building was enlightened for a nonresidential project in the 1950s. Using a site philosophy similar to one he applied to homes, Williams chose not to force his design into the alloted space, but to incorporate the existing botanical garden as an integral part of his design. A glass facade on the third floor served two purposes: a source of natural light for classrooms/laboratories and as a portal for students to look out over the garden. Williams also included a "sight-seers" deck physically extending over the garden.

Designed for use by UCLA students of all academic levels, the many laboratories provided rare hands-on experiences even for freshmen. When interviewed at the time of construction, Dr. Mildred Mathias, vice-chairman of the Botany Department, noted that most universities allot research space only to graduate students and faculty. "When the new building is available the students will be able to see for themselves --- instead of taking a textbook's word for it."