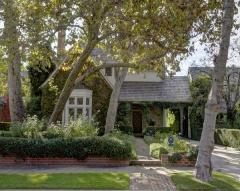 The Los Angeles Times described William P. Banning’s mood as sanguine when he was interviewed shortly after the U. S. financial markets crashed in October 1929. Banning reassured the newspaper readers that the “worst is over” and the market “will seek higher levels.” An officer in his family’s brokerage firm, Banning’s optimism is reflected in his recent move into a new Paul Williams designed home in Hancock Park.

Hancock Park was a premier location for many of Los Angeles’ elite families during the 1920s. The residential development was 80% sold by 1930 in spite of the Great Depression. (Resnik Co. Hancock Park Square: A Marketing Pamphlet, 1973) Hancock Park quickly evolved into an enclave for the affluent and a showcase for homes designed by major regional architects including Paul R. Williams. (Hancock Park Preservation Plan—November 8, 2007)

The majority of the houses on North McCadden were completed by 1924 in the popular Spanish Revival or Mediterranean architecture. Williams’ plans for the Bannings reflected a change in taste in Hancock Park—homes with English, French and even Gothic revival exteriors with interiors adapted for modern Californians.  (ZIMAS Preservation Overlay for North McCadden)

Though Williams’ contemporaries might discount his “revival” work as breaking “no new ground,” a growing list of projects validated his method of helping a client to “ know what they want … and know when to quit.”  (Los Angeles Times. October 11, 1970) His client-centered approach proved financially successful, “If I build the kind of a house a client wants, I’m a good architect.” (Time. January 26, 1948) While many of his competitors went bust during the Depression, Williams’ firm prospered.

William Banning’s home is an example of Paul Williams’ willingness to bend the formal rules of revival design by mixing different historic elements. While the other Banning houses were a more formal take on English Revival, William Banning wanted a home blending Tudor and English Cottage styles. Instead of designing an exterior of typical Tudor half-timbering with plastering or a massive brick chimney as the focal point, Paul Williams used a large bay casement window filled with diamond-shaped multi-paned glass. The simple, covered English Revival style front porch was an inviting touch.

Though deceptively small from the street, the Banning’s $60,000 house with six bedrooms, five baths and space for live-in staff  (U.S. Census 1930) dwarfed the average American’s “dream home” of 4.5 rooms. At the time a typical single-family house was built from plans ordered from a catalog or modeled after magazine illustrations. The average new homeowner rarely hired an architect or large contracting firm. The cost averaged $1,460. (U.S. Census of Housing, 1950, Trulia Data in Forbes.com 5/02/2013)

When Paul Williams designed the trio of homes for the Bannings, the plans and drawings were completed after extensive interviews with the clients. Interior designers and landscapers were introduced early in the process and the team equipped each house with the latest amenities: disappearing screens, large hot water tanks, tiled bathrooms and fully equipped modern kitchens, hardwood and custom metal details.

At completion the homes were considered important additions to Hancock Park and to the resumes of the professionals who worked on them.  In 1929 builders Howden and Howden proudly highlighted the homes in their company’s booklet. (Banning Family Papers Box 15, item 1200)