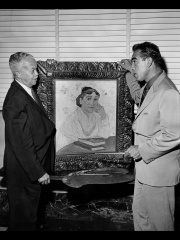 Because of his designs for their Beverly Hills and Hollywood homes, Paul R. Williams is often described as the “Architect to the Stars.” In this photograph, he is standing with one of his clients, the movie star Anthony Quinn. They were attending the 1957 van Gogh exhibit at the Los Angeles Municipal Art Gallery in Barnsdall Park, where they posed with one of that painter’s works. Quinn had recently won an Oscar for Best Supporting Actor for his portrayal of van Gogh’s friend, Paul Gauguin, in the film Lust for Life. Williams was present for his client and in his role as president of the Municipal Art Commission.