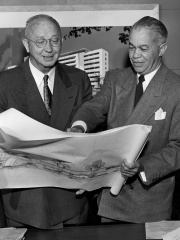 Orphaned at an early age, Paul R. Williams was raised by foster parents who believed in education. He attended Los Angeles public schools and graduated from Polytechnic High in 1912. At that time the school was described as "the acme of present day high school educational results." (Los Angeles Times. June 21, 1912) After graduation Williams worked while attending classes at the University of Southern California to strengthen his knowledge of engineering. (AIA files) He also participated in organizations that mentored aspiring young men in the community who wanted to become architects (Society of Beaux Arts Architects of California).

Williams secured positions as a draftsman in a number of well-known Los Angeles architectural firms. With each new position he expanded his experience base as well as perfected his skills as a draftsman. While working for the architect John C. Austin (1921-1924), he rose to the position of Chief Draftsman directing a staff of 20. At Austin's firm he was responsible for designing commercial buildings. During this time Williams also passed the California architectural licensing examination (1921). To obtain this licensure, the applicant provided proof of relevant education/real-world experience and passed an oral examination with supporting exhibits presented before a qualifying board. (California State Board of Architectural Examiners Report, 10, 1929)

After winning several design competitions as well as receiving a large commission from Senator Flint, the Flintridge developer, Williams was confident enough to open his own office. In his essay I Am A Negro, Williams wrote of the “power of example,” especially by African Americans who were educated. He believed that "individual-by-individual" his race would begin “to cast off its inertia and glimpse the way to a brighter future.” In this Herald Examiner photograph, Williams, a supporter of public education, joins the fight for a “yes” vote at the polls on school bonds. He is shown with Claude L. Reeves who would become superintendent of the Los Angeles public schools.