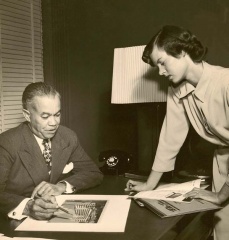 During the early decades of the 20th century a woman's role in architecture was typically secretarial support. In 1912 Mary Louise Schmidt, a Smith College dropout, went to work for Los Angeles architect Arthur Kelly as his secretary and assistant. While with Kelly’s firm, the intelligent, ambitious Schmidt came up with an innovative idea to revolutionize the working relationship of client, architect and builder. Instead of traveling across Los Angeles to see and select building materials from different suppliers, Schmidt proposed establishing "an exhibit where the building material man can display his wares. All the architect will have do is to take his customer to my exhibit, and let him look around. The architect will save … time, and the customer also … My profit will be the rental I get … Everybody will be happy.”  (American Magazine, September 1921) With a loan from her father, Schmidt opened her first exhibit space in 1914 (Architects and Engineers Service) in the downtown Los Angeles Metropolitan building. Her innovative service would become the “link between architects and the building materials industry.” (Los Angeles Times, September 14, 1997)

By the 1930s California building trades were responding to new trends in architectural design. To make it easy for the public to see and experience these changes, Schmidt promoted another new concept — the California House and Garden Exhibit. In 1936 the exposition, one of the first in the country, opened on Wilshire Boulevard. Architectural and landscaping firms, interior designers and department stores donated plans and rented display space. Paul Revere Williams' firm was one of five (Richard Neutra, John Buyers, Arthur Kelly, Risley & Gould) chosen to design model homes built on-site.

In the late 1920s Schmidt moved her growing company to the multi-story, modern Architects' Building designed by a collaboration of "prominent architects of the city." (Architect and Engineer, October 1927) The building was described as one of the only structures in the country "devoted exclusively to architectural and building interests" and a "monument to the enterprise and vision of an energetic woman ... who developed her ideas until her plans were realized."

In this 1950s photograph Williams is discussing an exhaust fan catalog with one of the A&E field representatives. Schmidt's policy was to hire recent college graduates for the showrooms. (Working at Schmidt's Los Angeles Building Center was a job coveted by socially prominent young women.) Their job was not to sell but to educate architects and engineers on the latest innovations and materials. The service became a source for important information on upcoming and ongoing building projects in Southern California and was described as a "rather civilized way to bring architects and products together."

Special thanks to Ms. Wendy McDonald, A&E General Manager in the late 1970s.