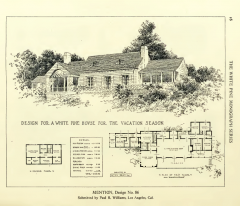 Mentoring and competition have always played important roles in the training of architects. Since the Middle Ages masters have transmitted the principles and necessary skills of architecture to their pupils and apprentices insuring continued rigor in the profession. In 19th century France, the Ecole des Beaux Arts was established to nurture and educate future architects.

Traveling to Europe to learn the skills of architecture was impossible for the majority of aspiring Americans. To guide “men of the future” licensed architects and national trade organizations developed ateliers (studios), taught classes, gave advise, criticism and encouraged the development of a “trained, artistic, and efficient body of practioners.” (Southwest Builder and Contractor. July 8, 1921) One important aspect of this American method of training was the design competition. To prepare himself for the competitive nature of architecture, Paul Williams entered many of these local and national events including the annual White Pine Architectural Competition (1918-1919).

Architect Russell F. Whitehead was the editor (and later owner) of the bimonthly White Pine Monograph Series from 1915 to 1940. Sponsored by the White Pine Bureau (Weyerhaeuser mills), the free publication was distributed to over 5,000 architects “suggesting the architectural uses of white pine…as a structural wood.” Though first published as promotional brochures, the Monographs quickly evolved into an important reference tool for “thoughtful architects” with its detailed descriptions, drawings and careful documentation of historic design elements. (Journal of the Society of Architectural Historians. March 1963) As editor, Whitehead initiated an annual competition to “engage the interest and support of the younger men of the architectural profession.”  He believed this “call for designs” would be the best method for discovering “unsuspected design talent.”

In 1918 Paul R. Williams submitted an entry to the Third Annual Architectural Competition to be judged in New York by a panel of nationally known architects. Each competitor was to design a house with white pine for a lakeside location. Though 204 drawings were entered, the expert panel noted that many of the renderings lacked quality of thought or seemed to abandon “every attempt at constructed architecture.”  In their final report they lamented that many competitors “overtaxed their fingers and under-exerted their brains.”  (The White Pine Series of Architectural Monographs. Volume IV number 4 1918)

After two days of intense consultation the judges selected four winning entries and a number of Mention designs including Williams’ entry (No. 86). The judges described his design as showing “… a good grasp of the elements of the problem … fits the site charmingly, is neither too free nor too formal.” Their major criticism of his design was that “the Palladian feature of the dining porch and the most unhappy dormers of the roof impair the beauty and unity of an otherwise interesting design.”

This 1918 design was not Williams only submission to this prestigious competition series. Earlier in 1917 the young designer entered drawings for a "House to cost twelve thousand five hundred dollars." Though the judges did not select his entry, his renderings were later published in an issue of The Independent (vol 91 1917). The writer described the Williams' home as an "unsymmetrical plan ... with picturesque exterior ... Practicability has not been sacrificed to make the design interesting."

Paul R. Williams would submit a third entry to the Fourth Annual Architectural Competition (1919) for a Community Centre Building. His submission was selected for Special Mention because "... it is an excellent expression of a big Community Center Group, has the charm of a New England town and the Community Building is unmistakably a wooden structure." Reproductions of his renderings were published in the August 1919 issue of The White Pine Series of Architectural Monographs (images 3 and 4).

When Whitehead died, the complete archives of The White Pine Series of Architectural Monographs were given to the American Institute of Architects because of their importance to architectural history.