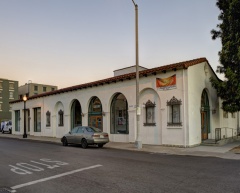 Canadian brothers George and William Chaffey were the first to recognize the economic potential of California’s Cucamonga Desert. This undeveloped area, east of Los Angeles, was popularly known as the wastes. The Chaffey brothers knew the area could be productive and profitable if “properly watered.” In 1881 they bought 6,218 acres and the water rights for $60,000 and named it The Ontario Colony. The brothers channeled water to their land through tunnels and concrete pipe from an underground source. After laying out streets and planting trees, they began selling lots in November 1882. The fast growing town was incorporated as Ontario on December 10, 1891. (Los Angeles Herald. August 26, 1909 and www.ci.ontario.ca.us)

Charles Latimer — a local entrepreneur, successful fruit grower, community leader — purchased the Frankish Company block in downtown Ontario in 1922 for $40,000 — a large sum at the time. The property was located in “the heart of the city’s district and is practically the only land in the center of the downtown section that has not been built upon.” (Los Angeles Times. October 15. 1922) Latimer’s vision was to create a commercial block with mercantile interests and other “high-class” uses.  In 1925 Latimer won a contract from the Federal Government to build the city’s first post office at Transit and Laurel Ave. He commissioned young Paul R. Williams to design the one-story building. Latimer acted as his own general contractor/builder on the project.

By 1925 Williams had successfully completed a number of public buildings in Southern California including the Monrovia Administrative Group (1924). Like the Monrovia building, Williams selected the Spanish Colonial Revival-style for the Ontario post office. This style gave the building an immediate presence — what California historian Carey McWilliams has called “fantasy heritage.” (Annals of the Association of American Geographers. December, 2003) A description of the proposed post office published in Southwest Builder and Contractor (December 2 separate issues 1925) highlighted the design features typical of this style: stucco exterior, tile roof, multi-colored hand-made padre-style tile floors and decorative ironwork on windows and doors. An elaborate gold leaf coat-of-arms and wall murals flanked the east and west walls. Though the exterior was traditional, Latimer insisted the building include skylights, a reinforced concrete vault with steel door and the latest modern technology an “intercommunicating telephone system.” This United States Post Office opened on April 1, 1926.

The building continued as the main Ontario post office until 1941 when a new community post office was built funded by the W.P.A. The local Civil Air Patrol, a volunteer unit that became part of the U.S. Air Force, converted the original post office space for their use. Currently the privately owned building has been renovated, rehabilitated and adapted for multiple uses including as lofts, commercial space and a community art gallery. It is one of only two known surviving examples of Spanish Colonial Revival-style architecture in Ontario. (City of Ontario Model Colony Awards Program, 2001-2009)

Recently the architectural pedigree of the Ontario post office has been questioned. The initial notice in Southwest Builder and Contractor (December 11, 1925) listed Riverside architect Albert Braunschweiger as designer but a correction was published shortly thereafter. In the December 25, 1925 issue, the architect of record was changed to Paul R. Williams.