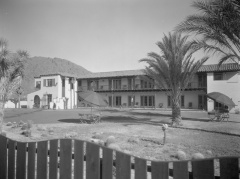 “Finishing touches are being put on the beautiful new Tahquitz apartments on South Main Street by the owners, Mr. and Mrs. Samuel Gehr.” Desert Sun. December 20, 1929

Before WWII Samuel Gehr, a Chicago transplant, was a pillar of Palm Spring’s growing business community. Elected to the leadership of both the Real Estate Board and the Chamber of Commerce, the “energetic” Gehr recognized the potential in financing and building new accommodations for the hundreds of seasonal visitors coming to the area. In short time he established a reputation as an astute investor in local real estate. (Industrial Chicago: The Commercial Interests. 1894) By the 1930s Gehr and his wife had amassed an impressive portfolio of rental and hotel properties. One of his initial ventures would be a large two-story “hacienda” style apartment the couple would christen Tahquitz Vista (1929). The Gehrs also selected Paul R. Williams, a young architect with his own growing portfolio of local projects, to design the building.

In the 1920s Palm Springs was experiencing a building boom fueled by hundreds of affluent health seekers and tourists wanting to mingle with the vacationing movie stars.  The town’s growth soon topped official projections. The Real Estate Board and local utility company reported that in 1929 $1,500,000 was needed for new construction projects and supporting infrastructure—over $20,000,000 in 2016 dollars. (Desert Sun. February 23, 1930) Aware of these trends Samuel Gehr purchased vacant land on the “southern extremity” of Palm Canyon Drive and hired Williams to design an upscale apartment building catering to wealthy seasonal visitors.

With his expanding list of satisfied Los Angeles clients, Williams’ reputation as a client-centered designer of historic revival styles now extended to Palm Springs. By 1929 he had completed three large commercial projects in the resort—all inspired by the indigenous adobe architecture. Using modern machine-made materials instead of traditional hand-made bricks and tiles, Williams’ designs were less costly, quicker to build and well suited to the desert environment. Though Palm Springs was quickly replacing its historic buildings with a hodge-podge of newer styles, Williams kept the exteriors of his buildings in keeping with the look of old Palm Springs creating instant classics. (Architecture. February, 1931)

Gehr understood Palm Spring’s rental market and instructed Williams to configure the Tahquitz Vista Apartments as an apartment-hotel hybrid, a style popular in Los Angeles. Williams’ finished design was his creative interpretation of the concept that included a mix of twelve double and triple apartments for up to six guests, as well as spacious single rooms—“all tastefully furnished” in “desert-tinted” fabrics, India woven drugget rugs and custom made Spanish-type furniture (images 3-6) His organization of guest rooms eliminated rigid class distinctions resulting in all guests intermingling democratically in “luxurious harmony.” (Los Angeles Times. December 16, 1932)

Beside apartments and room accommodations, Williams’ design for the Tahquitz Vista included communal spaces, recreational facilities and amenities that gave each guest “all the advantages of a private dwelling, yet minus the attendant bothersome details.” To insure panoramic views of either the desert or mountains, Williams sited the building on a slight elevation. A large private desert-scaped area included a pool, rooftop “sun-bath parlors” and other recreational amenities allowing guests to enjoy “the much needed rest and relaxation for which they came to Palm Springs” without leaving their apartment building. (Desert Sun. July 31, 1964)

The Tahquitz Vista’s design was a success with seasonal visitors and the apartment-hotel was known as “one of the finest apartment houses of Palm Springs” hosting celebrities and notables of the late twenties and early thirties. (Desert Sun. March 22, 1935) New investors approached the Gehrs and by 1935 the profitable complex was sold to Elias M. Rothman, president of Pacific Stores, and his Los Angeles socialite wife, Lena.  The couple's plans for the Tahquitz Vista were “grand” and included extensive renovations, interior modernizations and the addition of two large rental units and an office building. Mrs. Rothman, who considered herself an accomplished decorator and garden enthusiast, would personally direct the redecorations “in order to satisfy the most discriminating winter residents.” (Desert Sun. September 20, 1935) Interestingly, the Rothmans were already owners of a Williams designed property-- their home on South Rossmore in Hancock Park built in 1926. (ZIMAS) Though much of the original exterior of Tahquitz Vista would be retained, Mrs. Rothman revised the interiors to suit her own aesthetics.

In 1939 Stanley and Hermine Rosin purchased the Tahquitz Vista from the Rothman estate and converted the complex to seasonal apartments. They continued as the owners until 1964 when they sold the property to developer Irwin Schuman. In 1973 he demolished the buildings “preparing the site for better things.” (Desert Sun. July 31, 1964 and Desert Sun. December 15, 1973)