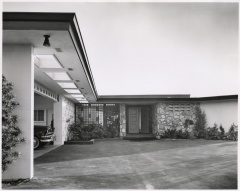 “There’s a certain fascination to peering into someone else’s home. It’s hard to pass an uncurtained window…without taking a peek inside. Maybe we all have a little of the Peeping Tom in us.” (Cecil Smith. Los Angeles Times. September 14, 1956)

On the evening of September 14, 1956 Americans watched newscaster Edward R. Murrow begin his live broadcast of his popular weekly CBS series Person to Person with the comment: “Frank Sinatra is, well … Frank Sinatra.” Person to Person, an early progenitor of modern reality television was a rating hit from the beginning as it capitalized on the public’s fascination with celebrity. The viewers were no longer satisfied with only reading about famous people; they now craved authenticity. Murrow’s staged, at-home conversations with the most famous personalities of the day were unprecedented. That night Frank Sinatra proved to be an irresistible draw. Murrow and the viewers followed Sinatra as he walked them through his newly completed “hip bachelor pad” designed by architect Paul R. Williams. By the tour’s end the house had become part of popular culture.

in the 1950s Frank Sinatra wanted to extend his career by acting in more films. Between marriages and needing a home base near the Hollywood studios, he purchased a hilltop lot on Bowmont Drive in the Trousdale Estate development with spectacular views of both Hollywood and the San Fernando Valley. He quickly hired Williams as his architect and gave the designer carte blanche. Sinatra’s instructions to Williams were simple: “I don’t want a large house. Just something small and livable.” (Ebony. March 1994) Given a free hand to design, the house would become Williams’ unfettered vision of the future.

Though the Trousdale Estates governing board mandated that houses must be single-story construction there were no limits to the home’s architectural style. Sinatra entrusted those details to Williams and his associates, leaving his former wife Nancy in charge of many of the decisions. Placing the house on the sloping lot proved an engineering challenge for Williams, but a harder task was giving the entertainer the quintessential Beverly Hills Mid Century Modern home he requested but also keeping it “within the bounds of grace.” (Los Angeles Times. October 11, 1970)

As many of Williams’ celebrity clients were inexperienced and unsure in their tastes, the architect frequently employed well-known interior designers to guide them. By the 1950s Williams could call on a trusted in-house team headed by his daughter Norma Williams Harvey. An experienced “color consultant,” Norma knew her father’s design philosophy. Her role on the Sinatra project was to select the soft goods and oriental style furniture and decorative items to compliment her father’s bold Japanese Modern concept. (Donald Bogle. Bright Boulevards, Bold Dreams. 2009)

During a 1970 interview with Maggie Savoy, Williams reminisced about some of the famous people he worked with during his career including Frank Sinatra, “Frank Sinatra wanted a bedroom; press a button and the doors open to the patio. Press another button and the bed rolls out into the patio.” Creating a tasteful home from the singer’s unformed vision was a challenge Williams and Norma were able to meet. Working closely with Nancy, Norma mixed white over-sized L-shaped sofas with Asian inspired high gloss lacquer furniture in reds, orange and black for a dramatic Hollywood background for Sinatra to entertain his guests. During the tour, Sinatra stopped by a large painted screen commissioned for the house. Because the program was televised in black and white he spent a few moments describing the painting's subtle colors and brush work. (images 5 & 8) Instead of building traditional walls between the public spaces, Williams installed Asian-influenced dividers made of wood and metal. The open worked dividers made the relatively small spaces appear brighter and larger.

Frank Sinatra wanted his home fitted with the latest of everything and he proudly demonstrated some of the "equipment" to the television audience. Williams, always fascinated by gadgets and mechanical toys, brainstormed with leading engineers and immersed himself in futuristic state-of–the-art technologies. The Sinatra house was filled with his discoveries. He had modern built-in cabinets installed to house the electronics, control pads and "dooh-dads" creating a neat, uncluttered look. (images 8-9) When Sinatra told him he wanted his house built around the hi-fi system, Williams had the walls of the main living space filled with special acoustical gravel and installed a series of powerful loudspeakers under the ceiling sheetrock. Guests raved about the sound quality of the recorded music. Throughout his career Williams enjoyed the challenge of finding unique solutions for every client, “You’re never too old to learn something new. No matter how diligently I tried to plan ahead and anticipate design problems, I never stopped learning.” (Karen Hudson. The Will and the Way. 1994)

As the television audience followed Sinatra through the house, he stopped in one of the two bedrooms and the living room. The camera focused on a number of "special" objects Norma Harvey had strategically placed in the rooms—among them photographs of his three young children, a framed, signed photograph of Franklin Delano Roosevelt and the two Oscars the entertainer had received including one for the 1946 RKO short film on race relations, The House I Live In. (Tom Santopietro. Sinatra in Hollywood. 2009) Sinatra linked the photographs and awards to his belief in the importance of family and public service. While the modern technology in the house should have been the highlight of the program, the viewers would forever associate Sinatra and his home with his love of family and country.

As soon as the cameras and lights were gone, Frank Sinatra left by car to a waiting plane that took him to Las Vegas for his final evening show. It would be months before Sinatra officially moved into his new home but his satisfaction with his Paul Williams designed house was frequently mentioned in the memoirs of his friends. The “sweep of drive, steps cut into the rock that led to an illuminated kidney-shaped swimming pool and a private cinema” all became part of the Sinatra mystique.

Steven Price, a local Trousdale historian, noted in a 2012 LA Curbed interview that the “Paul Williams designed stunner actually survived almost unchanged till 2006 when it was torn down for the ten-millionth muddleterranean mess to dot the Hills of Beverly.” As the majority of Paul R. Williams' professional papers were destroyed during the Los Angeles riots in the 1990s, the only available visual records of the house and its interior are the Merge Studio photographs held in the California State Library and online videos of the old Person to Person program.