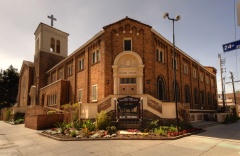 Officially organized on May 13, 1885, the Second Baptist Church was the first African American Baptist church in Los Angeles. During the tenure of its fifth pastor, Dr. Thomas Lee Griffith, Sr., the church outgrew its original building and the pastor led the membership to erect this new facility at 2412 Griffith Avenue in 1924. Dr. Griffith believed in encouraging black-owned business. After reading a number of books on church architecture and conferring with specialists in design, he hired Paul Williams and Norman F. Marsh to develop plans for the new building. A contemporary newspaper article about the church's ambitous plans proudly described Williams as "the only Negro in the United States to become a member of the National Association of Architects." (California Eagle. February 29, 1924) As part of his philosophy of economic empowerment for his community, Griffith insisted that all of the skilled workmen, including excavators, cement masons, carpenters, and brick masons used in the construction of the church, were from black-owned businesses.

Marsh and Williams planned, designed and provided general architectural services for the church's construction project. As the official architect of the Southern Baptist Convention, Norman Marsh drew the interiors, keeping in mind the core needs of the congregation: worship, religious education and social service. Williams designed the exterior and provided working drawings for the buildings. The church's Building Committee stressed to the architects the importance of planning for present and future congregations.

On Sunday, May 3, 2009 after extensive remodeling, the Second Baptist Church celebrated the rededication of their building. The result of careful planning, consultation with architectural experts and community fundraising the congregation updated their sanctuary. Recognizing the importance of their historic building, coupled with the needs of a modern facility, the church spent $6 million on a 19-month project for a new roof, electrical and HVAC systems, and ADA compliance. "Important historical elements"  of the Williams' and Marsh design were maintained in the up-dated design. (Los Angeles Times, May 20, 2007) The careful renovation of Second Baptist Church demonstrates the stewardship of the congregation in preserving this historic site.

Throughout its history Second Baptist Church has played an important role in the history of the African American community. On a local level the church provided a scholarship for Nobel Peace Prize laureate Ralph Bunche to attend university. During his career Dr. Martin Luther King, Jr. considered the church his "west coast" home, speaking there many times. (USNPS. National Register of Historic Places Registration Form, 2008) In recognition of its place as the first important nonresidential project in the Los Angeles African American community, this Romanesque-style building was proclaimed Historic-Cultural Monument #200 by the city in 1978. The revitalized Second Baptist Church, considered the most elaborate Baptist church on the West Coast when it was dedicated (remarks by Rev. Adam Clayton Powell, Sr.), was added to the National Register of Historic Places in June 2009.