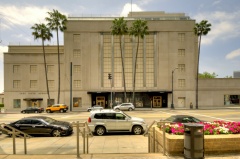 The original Saks Fifth Avenue at 9600 Wilshire was designed in the 1930s by the architectural firm John Parkinson and Donald B. Parkinson, Architects. Paul R. Williams was credited as "Architect for the Interiors." (Architect and Engineer, June 1940) Saks Fifth Avenue became one of the nation's foremost women's apparel stores. The Beverly Hills store was so successful it was immediately expanded to 73,912 square feet and would eventually employ over 500. Williams designed both the exteriors and interiors of the expanded Beverly Hills store in 1940 and 1948. New departments were added in these expansions including debutante dresses, furs, corsets, and a gift department. Perino's in-store Terrace Restaurant with its open-air seating was expanded (images 12-14) to include enclosed nooks for inclement weather. The additions made this the largest branch of the Saks Fifth Avenue organization.

The most marked feature of Williams' design was the complete absence of an overt commercial atmosphere in the store. The effect was of a series of small, distinguished individual shops, forerunners of the in-store boutique designs of the 1980s and 1990s. Like modern designer stores merchandise was kept in hidden recesses (image 6) with only a few samples visible. Adam Gimbel president of the Saks Fifth Avenue organization described the new concept in the Los Angeles Times: "Each room attempts to create a mood which is in keeping with the merchandise sold there. For example, a Pompeian room done in cool green with appropriate frieze is used for beach and swimming pool costumes and a French provincial room houses informal sports and country clothes The accessories are carried in an oval room done in a Regency spirit."

Williams' forward thinking design for Saks would make Beverly Hills one of the style centers of the world.