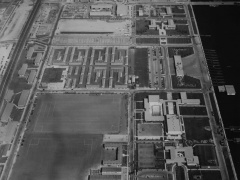 Adrian Wilson and Paul R. Williams participated in the design of the Roosevelt Naval Base in Long Beach, California, as members of Allied Engineers. The original purpose of the base was to provide recreational facilities for the Pacific Fleet. With the US entry into World War II in 1941, the scope of activities at the base was enlarged and it became the “Flag Ship” for the 22 naval activities comprising the Naval Operating Base (NOB). During its life time about a third of the base was devoted to administration and recreational facilities and the rest to industrial warehousing and ship repair.

Allied Engineers, a cooperative of California architects, faced many engineering and cost considerations when designing the complex. Their charge was to bring together a variety of naval shore activities, currently scattered around the harbor, on the man-made Terminal Island. The permanent buildings were supported on pilings and designed to withstand earthquake forces. Exterior walls were made of reinforced concrete with forms made with standard size plywood to control cost.

The Recreation and Bowling Alley buildings were designed primarily for peacetime use as a place for entertainment and health for the Pacific fleet personnel. It included covered arcades, an enclosed patio, fully tiled swimming pool as well as an auditorium and a gymnasium large enough for three regulation size basketball courts. There was also a library (image 18) and reading room for enlisted men. The walls of the library were made of slashed grained plywood in a natural finish with floors of colored concrete.

Image 22 shows the porte cochere of the Officers’ Recreation Building. An article in a 1944 issue of Architectural Record describes the affect as “simplicity with mass concrete and fenestration providing the visual interest.” This building was planned to provide activities for fleet officers and their guests and contained dining and grill areas, lounges, and fountain bar with waterfront views. While much of the interior decoration was made of plywood it was stained to simulate mahogany or laid in parquet patterns on the floors (images 15 and 24).

One of the major features of the Wilson and Williams Roosevelt Naval Base design was the importance of landscaping. (image 6 & 13) Created by Walter Hammond Sadler, a noted landscape architect, considerable funds were included in both the initial and continuing budget for building and maintaining the base grounds. ($175,000 in 1944) Roosevelt Naval Base was one of the last significant government sponsored landscape projects undertaken after the attack on Pearl Harbor. Basing his plan on City Beautiful movement principles, Sadler incorporated large-scale lawns, native plants (date and fan palms, Moreton Bay fig, olive trees, laurel fig, etc.) and over-sized concrete planters. His design gave the government facility a residential California flavor. (Library of Congress. HABS Report CA 2663)