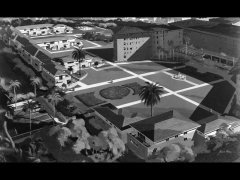 The Ambassador Hotel was owned by one family, the Schines, from its opening in 1921 until 1971. The hotel closed in 1989 and was vacant until demolished in 2006. During its long life, the hotel was the location of the famous Cocoanut Grove Nightclub (image 4), hosted the Academy Awards, and was the site of the assassination of Robert Kennedy. Nixon wrote his “Checkers Speech” in 1952 while staying there.  Paul Williams’ 1949 contributions to this Los Angeles icon were an extensive renovation to the interior as well as the exterior. (image 3)

The Williams' Ambassador Hotel renovations were highlighted in a number of travel and interior design magazines including the winter 1952 issue of the popular glossy Pictorial California. (images 3-6) The photos by Maynard L. Parker coupled with "breathless text" highlighted the refurbishing and deluxe upgrades. Williams worked closely with Don Loper, "the eminent Los Angeles Decorator" and together they "did a masterful job and created for the hotel interiors... the acme of elegance, luxury and exciting color." At the time it was estimated the hotel's owners would invest $10 million to implement Williams' grand design. "A new swimming pool, junior size golf course, and the building of a group of 500 bungalows...connected to the hotel by means of a tunnel" were all part of his vision for the Ambassador. (The New York Age. January 1, 1949)

When the Ambassador Hotel opened in 1921, bean and barley fields surrounded it. Until the early 1970s, this stretch of Wilshire Blvd. was L.A.’s version of New York's Fifth Avenue, and the Ambassador was the hotel of choice for celebrities and dignitaries. When it closed in 1989, the rest of the city with the upscale hotels had moved further west, and the area was in decline. The turning point in the Ambassador’s history was the assassination of Senator Robert F. Kennedy in the hotel’s kitchen on June 5, 1968. Until that moment, the hotel, along with its Paul R. Williams’ redesigned Cocoanut Grove night club (image 4), coffee shop, and elaborate main entry way was known as a glamorous palace of music and celebrities. Overnight the shock of the assassination transformed the hotel from a place of entertainment into a national shrine.  As the singer Rosemary Clooney described it, “Other nightclubs were like copies from nightclubs in movies. But the Grove was the real thing…”  The Los Angeles Unified School District purchased the vacant complex in 2001 with plans to demolish the entire complex, but the Los Angeles Conservancy wanted to save the historic Ambassador Hotel.  Despite the work of the Conservancy, the complex was demolished between late 2005 and early 2006. In image 7 the hotel entrance is stripped of its glamorous awnings and is ready for demolition.