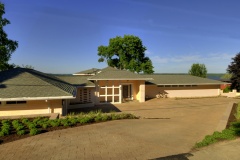 The Chautauqua tradition of intellectual and physical renewal began in 1874 when Reverend John Vincent combined his Sunday School Institute with an open-air-camp-meeting on the shore of Lake Chautauqua in Upstate New York. Expanding the scope of his original purpose of training Sunday school teachers, Vincent melded entertaining lectures on self-improvement with cultural and intellectual topics and created a popular program that spread across America. By the early 20th century the Institute had lost its momentum and the original New York location was the only “assembly” that still adhered to the ideals of its founders. (Tozier. “A short life-history of the Chautauqua,” The American Journal of Sociology, 1934) It was here at Chautauqua that banker Leonard Chase Ritts commissioned architect Paul R. Williams to design his family’s retreat. The current owners of the Ritz/Kohl house affectionately call their home the Oh, Wow House because of the initial response of everyone as they enter. When Paul Revere Williams designed the original 1-½ story, concrete block building overlooking the lake, he intuitively understood the importance of the location to his clients. Though the Ritts family called Tulsa, Oklahoma home, they came to Chautauqua each summer for spiritual, intellectual and physical refreshment. While Williams’ plan for the Ritts’ residence was unique for 1950s Chautauqua with an unusual roofline, large, open rooms, multiple outdoors patios and lake views, the home’s California pedigree clearly shows.

From 1950-1957 the Ritts family summered in their salmon pink colored home, known locally as the Pink House (vintage image 28). Ownership would pass through a series of families until 2009 when purchased by the Kohls. Longtime Chautauqua participants, the Kohls were determined to own one of the rare lakeside properties within the Institute’s gates. Though the Ritts' house was not for sale and needed renovations and repairs, Donna Kohl describes her feelings when she first glimpsed the home in 2008:A strange feeling came over me and I stopped right in front of the house, turned to Stewart and said, ‘This is the one; I don’t want any other house on the street. I don’t know how long it will take to come up for sale… but this is the only house for me.’ When the house did become available in 2009 the couple returned for a closer look.

I walked down the slope to the lakeside part of the house and crossed the upper flagstone patio, peered in one of the huge glass windows and lost my heart immediately. The soaring curved wall, the tall skinny columns, indoor planters, raised dining room leading down to a lower sitting room and a stairway made of slate was what I saw. My nose was pressed against that glass for a long time! The views of the lake from the house were stunning…

Months later the house was theirs.What is it about a Paul Revere Williams’ design that completely captures the heart of the owner? Architectural historian Mella Rothwell Harmon believes “Williams intuitively understood the human condition and the way in which people relate to buildings. Grounded as he was in architectural principles he was able to convey a building’s deeper meaning to his clients and to subsequent owners.”

Donna Kohl describes her deep attachment to the home that won her heart, “We now own that house. It will never leave our family if I can help it.”

The vintage photographs posted on this page were taken from 1950 through 1953 when the house was new. These sepia toned images show the rooms and furnishings as originally envisioned by Paul Williams and the Ritts family. It is interesting to compare them with the home's current incarnation. Thanks to a Ritts family member for preserving the photographs through the years and the Kohl family for sharing them with our project.