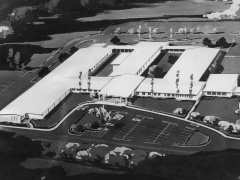 Before the discovery of a vaccine to prevent polio, this paralytic disease was feared across the world. In 1952, Adrian Wilson and Paul R. Williams submitted this drawing for a new post-polio and Respiratory Center unit at Rancho Los Amigos Hospital in Downey, California. The $1,700,000 structure was completed in 1953 and officially dedicated in February 1955. (Los Angeles Times. February 18, 1955)

This rehabilitation facility housed 200 polio patients, some ambulatory and others confined to iron lungs. To insure the continued operation of the electric breathing machines during emergencies, the architects included auxiliary power sources. This was an innovative idea for that time. Wilson and Williams incorporated many of the same ideas they used in their home designs in the hospital to let patients continue to enjoy the out-of-doors California life-style. Covered porches adjoining the wards were equipped with electrical outlets for respirators, rocking beds and even portable telephones.  Much of the funding for the new unit was provided by the L.A. March of Dimes and a county bond issue promoted by Citizens for the New Polio-Communicable Diseases Hospital (Los Angeles Times, October 5 1949)

In his letter of support for Williams' nomination as a Fellow in AIA, County of Los Angeles Supervisor Arthur J. Will described the specialized Los Amigos Hospital and its place in the county's long-range plans for the "care of the indigent sick...or as an addition to already existing hospitals." Though the Wilson and Williams design was the smallest hospital built at that time in the county system, "This particular building is a triumph of beauty and science and is functional to the nth degree." (February 25, 1957)