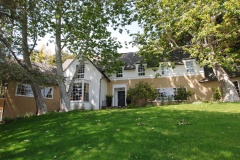 Americans are fascinated with celebrity. Mid-19th century newspapers and illustrated magazines featured the scandalous details of the lives of the original first family of American acting—the Booths. Their illicit affairs, dramatic triumphs and fashionable clothing were chronicled for an eager public. Like Elvis Presley's Graceland, Tudor Hall, the Maryland estate of the senior Booth, was a well-known architectural landmark visited by his many fans. Twentieth century Americans are still fascinated by the famous and how they live.

Scores of Paul R. Williams’ clients were bona-fide, movie stars. Luise Rainer (1929), Antonio Moreno (1929), Hobart Henley (1933), Lon Chaney (1930), Virginia Bruce (1931) and Arthur Lake (1941) were wildly popular actors when Williams designed their homes. Their houses and gardens appeared in glossy magazines—Architectural Digest, House Beautiful and Pictorial California. Now largely forgotten, these film stars were an important segment of Williams’ client base that also included producers, film directors and other members of the movie industry. His client list was a Who’s Who of powerful industry players including Everett Crosby, Jay and Bill Paley, Bryan Foy, Ingo Preminger and makeup inventor Max Factor. (Even the President of the government’s censorship board, Will Hays, lived in a Williams’ home.) Film stars came and went, but without the moneymen there would have been no film industry in Hollywood.

Alexander Pantages controlled the largest Vaudeville circuit in America. His entertainers played in hundreds of venues owned by his company. Building an impressive chain of theaters and playhouses, this entrepreneur converted them to movie theaters when the popularity of live-theater waned. Alexander retired early because of a scandal and turned his empire over to his son Rodney Alexander Pantages. Rodney lived in a Paul R. Williams’ designed home.

In 1931 “at a simple ceremony attended only by relatives and close friends,” Rodney married Beatrice Veryl Sweeney. According to current Los Angeles real estate lore, the father contracted with Williams to design and build a home for the couple as a wedding gift. Newspaper articles from the time challenge the validity of this popular tale. In 1934, many years after the wedding, the Los Angeles Times “Real Estate News Flashes” column (October 8, 1934) listed Rodney as Williams’ client for the proposed home on Nottingham Avenue. This article noted that the Los Feliz Hills architectural committee approved the plans for a palatial home behind a private gate for Rodney Pantages. “Construction is to begin immediately.” A brief notice in Southwest Builder and Contractor (October 26, 1934) announced "plans by Paul R. Williams" for Rodney A. Pantages with Howden and Howden acting as builders. The official county building permit (14119)  also lists Rodney A. Pantages as the sole owner at the time of construction.

The 5000+ square-foot 2-story, wood, plaster and brick fireplace, Colonial Norman revival-style home was sited on ½ acre. The plans for the 12-room house included a landscaped pool with an elaborate outdoor seating area and separate guesthouse. (LFIA Historic Survey) After 70 years and a parade of entertainment A-list owners, the home has been altered. Renovated, updated and enlarged, only the home's “good bones” remain with hints of the original Williams’ styled interior—the architectural trim, sun-filled rooms and the classic Williams’ curving staircase.

If Alexander Pantages did gift the home on Nottingham Ave to the young couple, the house lasted longer than their rocky marriage. Beatrice and Rodney divorced in 1939 after an acrimonious public trial. Newspapers across the country carried details of the scandalous testimony. He accused her of “habitual intemperance and association with other men.” She accused him of “indiscrete conduct on a yacht.” (Los Angeles Times, October 12, 1939) When the divorce was finally granted, Beatrice lost custody of her children and was awarded only $100 a month. The country was shocked by the contents of a letter Beatrice wrote to her Palm Springs-bartender lover that was eventually read in court and reprinted in newspapers. In his final statement the judge wrote, “Mrs. Pantages is to have the right of visiting the children at all reasonable times ‘when she is not under the influence of intoxicants.’” (Milwaukee Sentinel, December 2, 1939) The ultimate ownership and custody of their home was not made public.