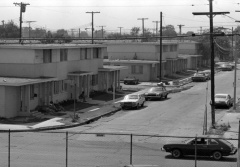 When William Nickerson, a founder of Golden State Mutual Insurance Company, died in 1945 he was described by the Chicago Defender as a man who “Made good … a top businessman ... yet, human to the core.”  Soon after his death the California State Association of Colored Women and the Los Angeles Urban League began campaigning to create a permanent monument in his memory embodying his personal qualities of “friendliness, love of children, young people, enthusiasm, and deep concern for others.” (John Ingham African-American Business Leaders, 1994) In March 1954 a housing project named after Nickerson and designed by Paul Revere Williams opened in Watts with much fanfare. Intended as a planned environment where families would live “not just side by side, but profitably with each other,” Nickerson Gardens eventually became identified with everything wrong with public housing. (Richard J. Neutra, The New Pencil Points, 1942)

While Nickerson Gardens was a large 1110-unit development on 55 acres, Williams created the impression of smaller neighborhoods with his design. By placing the community center at the hub with curved streets radiating out from the center, visitors and residents saw only small sections of the project from any one point. Extensive landscaping, gardens, and the use of concrete block walls at the end of the two-story apartment buildings created a feeling of privacy for the tenants.

Though this was a public housing project, Williams included in his plan many of the California inspired design elements found in his 1950s residential subdivisions: flat roofs with wide overhangs to protect against summer heat yet admit winter sun, stucco and concrete block construction, light colors inside and out, wide windows, and open floor plans to ventilate each apartment. Picture windows in the rear of each unit overlooked green areas intended to provide residents with an outdoor living space. (The Journal of Housing, December, 1954)

An important part of Williams' design was a large multipurpose neighborhood center. Meeting and craft rooms, a gym seating 500+ and indoor/outdoor theater spaces were included to provide the tenants with a sense of community. The inclusion of green spaces, baseball diamonds and fully equipped playgrounds was revolutionary for the time. In a series of magazine articles, William Nickerson, Jr. Gardens was touted as an ideal for all future U.S. public housing.

The use of "Gardens" in the name of this particular housing project was important to the aesthetic outcome of the Williams design for Nickerson. In spite of the challenges imposed by government restrictions, Williams still believed in the value of providing quality of life to residents. He often collaborated with important regional landscape architects on his many public projects and signed Ralph D. Cornell, an experienced public works landscaper, for Nickerson Gardens. Together they focused on simplicity and function, ongoing maintenance issues and providing meaningful private space for each household. instead of frills their design highlighted making "every tree and shrub count to its utmost." (Architect and Engineer. September, 1942)

The original intent of both Williams and the Housing Authority in designing and building Nickerson Gardens was to provide low cost, safe, transitional housing. Williams’ use of a unified design with a limited variety of building materials was not considered monotonous by urban planners of the time, but a modern, cost-efficient way to create a harmonized neighborhood. Fifty-years later it was generally agreed that concentrating so many poor people in a limited area creates a self-contained, isolated ghetto. Instead of the “well-conceived environment” in which “new and fertile social habits can crystallize” as envisioned by architect Richard Neutra, Nickerson Gardens became the ignition point for the 1965 Watts riots. Work by organized groups including the Nickerson Gardens Resident Advisory Council (image 2) and the Watts Labor Community Action Committee (WLCAC) have done much to improve the quality of life for the residents. The WLCAC motto is "Don't Move, Improve."