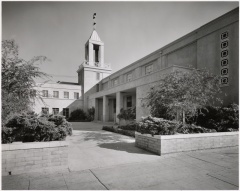 In 1900 there were only 3,131 African Americans living in Los Angeles, a city with a total population of 102,000. (1900 US Census) Though the Black community was small, the 1906 Los Angeles City Directory listed five Baptist churches. The oldest and most affluent was the Second Baptist Church founded in 1885. Eventually a number of its congregants left  “after periods of internal wrangling over religious, class and cultural differences” to establish a number of splinter churches representing their own particular core values. (US Park Service. Historic Resources Associated With African Americans in Los Angeles, 2008) One of the new churches was New Hope Baptist which held its first meeting at True Reformer’s Hall on January 1906 with 100 members.

A number of dynamic pastors would lead New Hope and it quickly established itself as a church with its heart in the African American community. In 1945 new pastor, Dr. Bernard O. Byrd, expanded the church’s many outreach services and the congregation quickly outgrew its original campus. Byrd and the church’s trustees selected Paul R. Williams to design a new building to fulfill New Hope’s role as an educational center for the evolving urban African American community. On October 21,1954 Dr. Byrd led his congregation into its new home at 5200 South Central Avenue.

By the 1950s Paul Williams had already designed scores of religious buildings across southern California and in other states. His masterful tact and ability to work with clients of varying aesthetic tastes would serve him well as he maneuvered commitees, trustees, wealthy patrons and ministers who were all passionate about what their new sanctuary should represent. Williams’ design for New Hope Baptist was not one of the traditional historic revival styles favored by many churches built during the mid-century. The building's solid structure represented its place as an important  pillar of the African American community. Its clean lines and impressive interior reflected the sophistication of modern Los Angeles. The two-tiered sanctuary, dramatically lighted baptismal pool and a sectional choir stand reminded the congregation of its important spiritual purpose.

New Hope's campus continues to grow as the church's list of social services expands. The Williams' designed sanctuary, however remains an impressive tool to carry out the ministry's motto: Transforming Lives Through Christ Centered Ministries. (Raise the Praise. October 20, 2013)