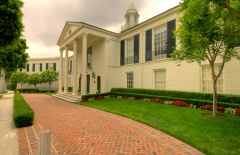 The headquarters of Music Corporation of America (MCA), located at 360 North Crescent Drive in Beverly Hills, earned Paul R. Williams the AIA Award of Merit, Southern California Chapter, in 1939. This property totals 124,000 square feet including parking garage and gardens complete with fountains and statuary. Williams originally designed and built the English Georgian Revival style complex in 1938 at the behest of Jules Caesar Stein, ophthalmologist/musician and "agent to the stars." It was only natural that Stein would select the reigning "architect to the stars" to design a headquarters matching his professional aspirations.

Originally Stein supplemented his medical income booking events for musicians and singers in the Chicago area. His success at matching speak-easies with talent encouraged him to give up medicine and concentrate on entertainment booking. At one time MCA represented most of the name bands in the country. By the 1930s the doctor was thinking "big" and moved his new practice to Hollywood and expanded his firm to include film talent. His list of movie personalities included young Bette Davis, Fred Astair and Greta Garbo. (Los Angeles Times. December 7, 2002)

Stein wanted to transform MCA from its speak-easy origins to a business with establishment cache. Building a new headquarters was his solution. "If there was a defining theme to the taste of Hollywood power elite, ... they most often chose feel-good architecture for their offices and homes ... reminding them of home." (David Wallace. Hollywoodland, 2002) As one of Southern California's most sought after architects of the revival-style, Paul R. Williams was a natural choice for Stein.

Williams' use of a classic English Georgian design to house a complex for all of MCA's client activities matched Stein's own transformational vision for his company. While Los Angeles embraced the new look of Art Moderne, the public still equated colonial styling with tradition, gentlemanly old money and the idealized Northeast coast version of the American home. From the massive antique iron gates (image 10) to the green shutters, portico, cupola and ornate gardens by Phil Shipley and Associates, the campus-like grounds had a residential, hushed feel even though the main building contained over 30 offices, a radio station, projection room and even a hidden bar. The lush interior details—sculpted moldings, paneling, chair rails, and antique-like furnishings—put MCA's elite Hollywood clientele at ease. (images 11-13) The home-like ambiance encouraged the talent to feel they were included in the MCA family of stars.

MCA sold their Hollywood complex to Litton Industries in 1964. Tex Thornton, President of Litton, hired Williams to design a second, larger three story building (image 7) and parking area in keeping with his original design. When these renderings and models [images 16 to 20] were completed in 1969, Litton Industries occupied the space.

By 2003 Platinum Equity acquired the complex and currently occupies the buildings.