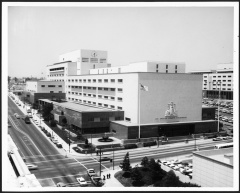 Built in the mid 1950s, the Los Angeles Superior Court Stanley Mosk Courthouse was a joint architectural project of the Associated Architects, a group that included J.E. Stanton, Paul R. Williams, Adrian Wilson (a frequent collaborator with Williams on public projects) and the firm of Austin, Field & Frey. The new building was to replace the original 1891 courthouse designed by Curlett, Cuthbertson, and Eisen that was damaged in an earthquake, condemned and torn down in 1936. This earlier red sandstone Romanesque-style building was considered a Los Angeles landmark because of its beauty and its unique outside cage-like elevator located at the rear.

Scores of national and regional architectural firms submitted proposals for the right to design the courthouse but eventually the contract was awarded to the local Associated Architects collaborative. Their ambitious plans for the legal complex included two separate building units on different levels, one for municipal courts, and the other for superior courts. Though originally budgeted for $17 million, the eventual cost would balloon to $24,000,000+, making it one of the most expensive courthouse construction projects in the country at that time.

Image 2 shows the final 1958 rendering submitted by Associated Architects. The building’s long rectangular lines are evident and conformed to an overall architectural master plan proposed for the LA Civic Center and Mall that was to include the new courthouse. The desire for a coherent and unified plan for the government area however, would be an elusive goal for Los Angeles. While the Mosk Courthouse was completed in 1958, a hodge-podge of various unrelated downtown urban renewal projects resulted in haphazardly placed walls and barriers with no physical connection between the spaces. By the 1970s, the general isolation of the Civic Center from the rest of downtown meant the governmental area was largely deserted after working hours.

The choice of the International Style (IS) for the County Courthouse by the Associated Architects was a departure from the usual American judicial building construction of the mid 20th century and has been widely debated by architectural critcs. (The local discussion can be followed in a series of articles in the Los Angeles Times listed in the BIBLIOGRAPHY section of RESOURCES.) Stripped of the conventional classical allegorical and legal decoration found on comparable buildings, the streamlined complex appears “all business,” a notion that conformed to the popularly promoted local vision of what a modern Los Angeles should be.

Image 1 shows one of only two areas of exterior decoration added to the building, a bas-relief over the Hill Street entrance depicting Justice by California artist Donal Hord. The female figure dressed in judicial robes is surrounded by symbols representing the goals and purposes of a judicial building: universality, power, impartiality, and truth of the law. Hord completed his design for Justice in 1956 and it was included as part of the original proposal for the building. Measuring 24’x24’ it would be the artist’s largest sculpture. Justice was modeled in clay and glazed and fired at Gladding McBean, a major manufacturer of architectural terra cotta. The sculpture was installed in early 1957.

Through the decades the Mosk Courthouse has had mixed reviews from court staff and the Los Angeles legal community. On-going issues with basement flooding, inadequate heating/cooling and electrical problems have plagued facility engineers and the building's aesthetics have not always been viewed positively. David Gebhard, a nationally recognized architectural historian and critic, took the building's designers to task describing it as “fifties Modern attempting to be classical and public.” With its rich interior materials of stone and natural woods contrasting with the almost stark exteror lines, the Mosk Courthouse was a local civic landmark searching for its aesthetic identity.

The Los Angeles County Courthouse was formally dedicated on October 31, 1958 with hundreds attending the ceremony. To indicate its important place in the national legal system, U.S. Supreme Court Chief Justice Earl Warren, seen here in image 3, was the featured speaker.

For additional detailed insight into the construction of the Los Angeles County Courthouse and its place in the city's legal community please read the article by Judge Elizabeth R. Feffer. (Gavel To Gavel. Spring 2013)